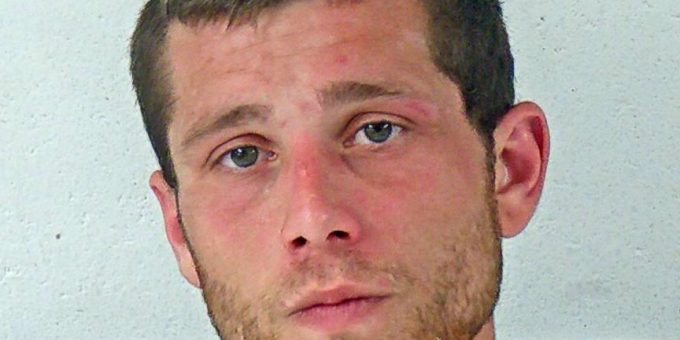 BEDFORD – An Oolitic man was arrested Tuesday after Lawrence County Sheriff’s Department deputies received a request to conduct a welfare check on a male sitting in a gray Ford pickup parked on the bridge on South I Street.

The caller reported the male was dozing in and out.

A deputy responded and found the truck parked in a gravel pull-off, not in the roadway. The deputy found 29-year-old Nicholas Atkins slumped over in the driver seat, with the truck running. The deputy was able to turn the truck off and wake Atkins.

Atkins claimed he was overly tired from working early that morning. Atkins denied taking part of any illegal narcotic activity when he was asked by the deputy. Atkins explained to the deputy that he was driving his father’s truck and had just cleaned out his father’s car. He then pulled four syringes out of his pocket that he claimed were found in his father’s vehicle while cleaning it.

Deputies conducted a vehicle search and found two packs of Marlboro cigarettes. Inside one pack was cellophane with marijuana inside and a rolled marijuana cigarette. Located in the second Marlboro pack was a piece of wrapped foil which contained heroin.