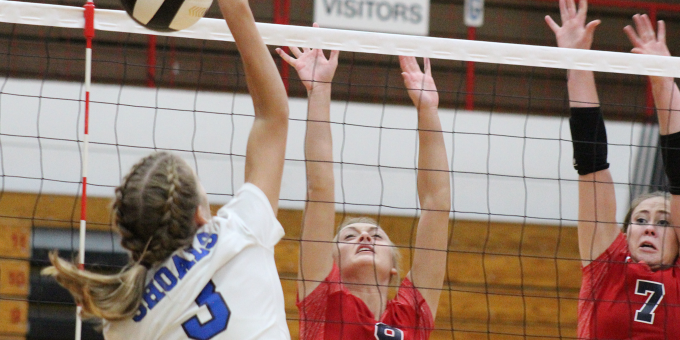 BEDFORD – With all the chaotic emotions of Senior Night – the displays of old photographs and memories, the pregame introduction and walking arm-in-arm with parents, the pictures and hugs with friends and family – it’s difficult for any sense of normalcy. And if that wasn’t enough, Bedford North Lawrence’s Lindsay Streeter got an extra dose of love.

Her brother Dylan, serving in the Coast Guard and stationed in Georgia, made a surprise visit for the celebration on Thursday night. Little sister was a mess.

Through the tears and the sentimental journey, the Stars found a way to end a seven-match losing streak. If that’s what it takes, older brother might have to stay a little longer.

With the six seniors (seven, counting sidelined player-turned-manager Merritt Callahan) playing the majority of the first and third sets, BNL chiseled out a three-set victory over Shoals. The Stars honored Emma Foreman, Streeter, Carlee Kern, Reva Tincher, Maddy Bennett, Trista Stigall and Callahan with a 25-17, 25-15, 25-15 triumph over the Jug Rox.

“We have a great group of seniors,” BNL coach Gabrielle Arthur said. “They got to play together, got to start and finish together, that was a good experience.”

Considering the Wednesday practice session was the first time for the sixsome on the court to work together, the Stars were sharp. They ripped to a 13-3 lead in the first set and a 12-3 lead in the second. The glitches were minimal, solved with a couple of quick timeouts to point out the obvious: keep it together.

“It was difficult to get good chemistry like we do with our normal lineup, but it was good,” Bennett said. “It’s very exciting. It’s a good way for the seniors to go, getting a good win.”

Any win was a good win as BNL ended its slump, winning for the first time since the 10-day shutdown (because of virus protocols) that caused season dysfunction. The Stars improved to 2-9.

”It’s good to have another win under our belt,” Arthur said. “We needed a win. We needed to build some momentum.”

The early boost was courtesy of Bennett and Kern at the service line. Both of them totaled 3 aces. The offense, which ran through Stigall as a setter while starter Annie Waggoner took a back seat to the upperclassmen, was punctuated by Camryn Anderson’s 7 kills. Tincher had 5 kills and Waggoner added 4.

On the back row, Bennett had 11 digs, Foreman added 10, and Stigall finished with 8.

BNL played the first set on an adrenaline rush, performed well in the second with the usual suspects getting more court time, and needed a boost in the third when the initial surge of intensity wore off.

“I was struggling with my emotions in that first set,” Streeter said. “I finally got my game back on.

“It means a lot to me. We’ve been struggling, so winning meant a lot. There were a lot of emotions running. All of us are crying. It’s knowing we’re coming to an end, and we’re such a close group. We grew up together, and we’ve always been close. A lot of seniors are just close here, but we’re close on and off the court. We’re always hanging out. We have a great relationship.”

BNL will play other home matches, but the celebration gave this night something special. It signaled the beginning of the end for some.

”Just thinking about not being here next year,” Bennett said. “This is all I know.”