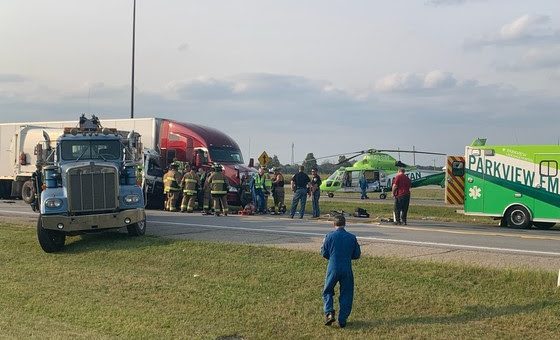 LAGRANGE CO. – Monday evening at approximately 5:10 p.m., troopers from the ISP Toll Road post responded to a vehicle crash involving two commercial vehicles on the I-80 Toll Road near the 125.7mm in LaGrange County. This crash subsequently claimed the life of one of the drivers involved, 67-year-old Herbert Meade, of Olmstead Township, Ohio.

Arriving on the scene, troopers found a white 2020 Mack truck crashed into the passenger side of a red 20018 Kenworth semi-tractor/trailer.  There was heavy damage to the Mack truck with the driver trapped in the wreckage and suffering from serious traumatic injuries.  By the time medical crews were able to get to Meade to provided medical assistance, he had succumbed to his injuries.  He was pronounced dead at the scene by the LaGrange County Coroner.

Trooper Zachary Mckenzie’s preliminary investigation revealed that Meade’s 2020 Mack truck was traveling eastbound in the left lane of I-80 following behind the 2018 Kenworth semi-tractor/trailer driven by Michael D. Ashley, 57, of Cuyahoga Falls, Ohio.  At the time, the eastbound lanes of I-80 were restricted down to the left lane due to road construction. Traffic ahead had slowed or stopped due to that construction.  Ashley began slowing for the stopped traffic, however, Meade’s truck was following too closely and failed to get stopped, subsequently crashing into the rear of the Kenworth’s semi-trailer.  Meade’s truck sustained heavy damage to the driver’s side of the cab area, causing his entrapment and fatal injuries.  Ashley was able to exit his truck uninjured.

Family notifications have been made with the assistance of Ohio authorities.

This crash remains under investigation. There is no further information to release at this time.