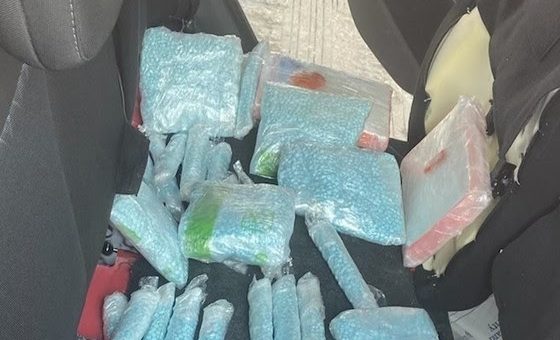 HANCOCK CO. – A traffic stop for following too closely led troopers to a major drug arrest.

On Monday, September 13, an Indiana State Trooper noticed a red Chevrolet passenger car following another vehicle too closely in the center lane of I-70 near Greenfield. The trooper pulled the vehicle over and identified the driver. Subsequent interaction with the driver and a search of the vehicle led to the discovery of 15.8 pounds of what are believed to be Fentanyl laced pills and 4.4 pounds of pure Fentanyl hidden under the rear passenger seat.

Police arrested 39-year-old Felix Becerra Aguilera, of California the driver and sole occupant of the vehicle, he was arrested on preliminary drug charges of dealing a narcotic drug 10 or more grams, possession of a narcotic drug, and possession of cocaine and was transported to the Hancock County Jail.

Becerra-Aguilera had his first court appearance Tuesday, September 14th, in Hancock Circuit Court where a judge granted the prosecutor’s request for a $1,000,000 cash bond. A pre-trial conference is set for December 2021 and a jury trial is set for March 2022.