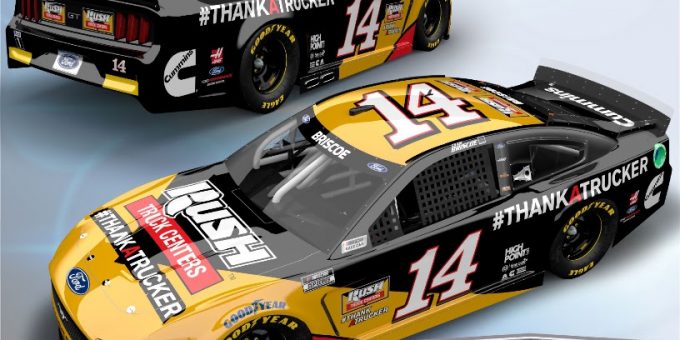 BRISTOL – Chase Briscoe and the No. 14 Rush Truck Centers/Cummins Ford Mustang team for Stewart-Haas Racing (SHR) head to Bristol (Tenn.) Motor Speedway for the second of back-to-back short-track races. The No. 14 team locked in a 16th-place finish at Richmond (Va.) Raceway last Saturday, a vast improvement from the result earned in the first outing at the Virginia short-track in April.

Saturday’s Bass Pro Shops Night Race will be the NASCAR Cup Series first race this season on the concrete of the famed .533-mile Bristol oval. Earlier this season, the Cup Series drivers competed on the dirt-covered short-track with Briscoe bringing home a 20th-place result.

“Our short-track program has definitely improved and we’re in such a different place than we were earlier this year, but I understand Bristol a lot better than I do Richmond,” said Chase Briscoe. “The biggest thing now is keeping up with the track and making sure the car is where I need it to be. Bristol is a track that is going to change a lot with the traction compound on the bottom. Everyone will be moving up to the top, and then the top will get rubbered in and you’ll move down to the bottom when that cools off. There’s always a lot going on at Bristol from a driver perspective that you have to keep an eye on and the track changes are one of those things.”

“Bristol is a track I’ve always enjoyed because it reminds me a lot of racing at Salem (Speedway) and Winchester (Speedway) in Indiana,” added Briscoe. “Those high-banked, fast tracks are always ones I’ve enjoyed. I don’t do well on the flat tracks like Loudon or Richmond, but the higher banks seem to help me. I had high hopes for the dirt race and may have gotten a little ahead of myself, but I’ve got a lot of confidence in our Rush Truck Centers/Cummins team this weekend and I’m really looking forward to this race.”

Briscoe made a total of 15 short-track starts in the Xfinity Series, scoring two wins – at Bristol last September 2020, and at Iowa Speedway in Newton in July 2019 – among his 10 top-10s.

Briscoe’s No. 14 Ford Mustang will carry the colors of Rush Truck Centers with a reminder to #ThankATrucker during National Truck Driver Appreciation Week, which runs Sept. 12-18. National Truck Driver Appreciation week takes on a special significance considering the crucial role truck drivers have played during the COVID-19 pandemic. Rush Truck Centers encourages fans to use #ThankATrucker to show their appreciation for the 3.6 million professional men and women who deliver our goods safely, securely, and on time.

The No. 14 Rush Truck Centers/Cummins Ford Mustang and all the SHR cars travel from race to race in haulers from Rush Truck Centers, the premier service solutions provider to the commercial vehicle industry. And those haulers are supported by RushCare, which helps customers find the nearest Rush Truck Centers location, provides service concierge and technical support, schedules mobile service, dispatches roadside assistance, and more. Rush Truck Centers is the largest network of commercial vehicle dealerships in the United States with more than 100 locations, and takes pride in its integrated approach to customer needs – from vehicle sales to aftermarket parts, service and body shop operations, plus financing, insurance, leasing, and rental, as well as alternate fuel systems and other vehicle technologies.