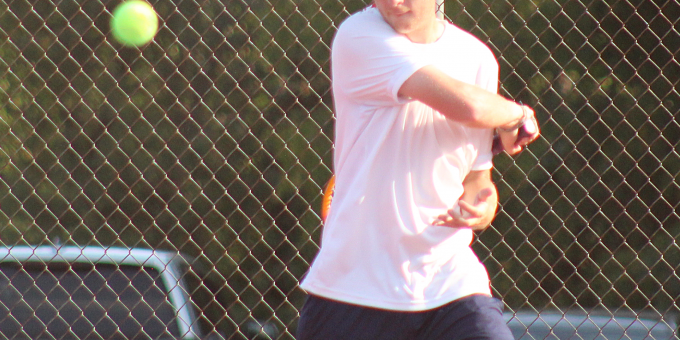 With senior Caleb Jones sidelined for virus protocols, with senior Cameron Gratzer hobbled and slowed by an injury, with Scottsburg’s No.1 doubles tandem winning the key points, the Warriors clipped the Stars 3-2 on Tuesday afternoon. BNL honored the three-man senior class (including Steven Graham at No.1 singles) but fell short on the scoreboard.

Scottsburg pulled out the final match with Jace Watson and Mason Cutter edging Gratzer and Jayden Kemp 7-6 (7-3 in the tiebreaker), 7-5 (with a late service break) at No.1 doubles.

“Cameron has been dealing with an injury the past few days, and really wanted to push through,” BNL coach Chris Kurtz said. “But he wasn’t able to move around the court well, and it wasn’t enough to pull out the win.”

Garrett McClellan conquered Graham 6-1, 6-3, and Isaac Bridges (subbing for Jones at No.3 singles) dropped a 6-1, 6-3 decision to David Gaffney.

“We missed out on a close one, trying to play through some adversity again,” Kurtz said. “Isaac stepped right in and played so hard. He has the best attitude, and really competes.”

BNL came through at No.2 singles with Graham Turner topping Eli Carr 6-2, 6-2. The Stars also won at No.2 doubles as Nate Pemberton and Carter Kimmel rallied from a first-set loss to down Noah Bagwell and Jonah Copple 4-6, 6-1, 6-0.

The Stars will visit Salem on Thursday.