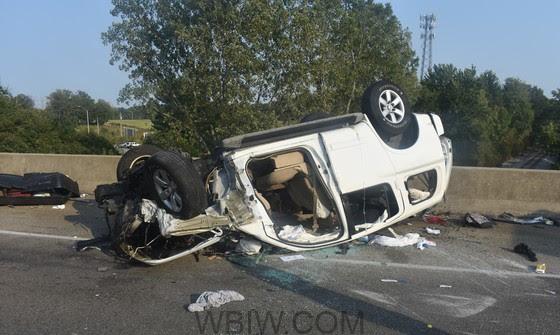 CROTHERSVILLE – On Sunday, September 12th at approximately 5:00 p.m., troopers from the Indiana State Police-Versailles Post investigated a single-vehicle crash on I-65 in southern Jackson County that resulted in two juveniles being ejected from the vehicle, causing serious injuries.

According to the initial investigation by Trooper David Simpkins, a white 2011 Nissan Armada, being driven by 32-year-old Kayla C. Irish, of Lakeland, Florida was traveling north near the 36-mile marker, at the Crothersville, Indiana exit.  For an unknown reason, she lost control of the vehicle.

The vehicle struck a guardrail and overturned.  The vehicle rolled before striking a concrete barrier wall and coming to rest.  During the collision, a nine-year-old female juvenile and a five-year-old male juvenile were ejected from the vehicle.

Irish, along with the female juvenile were transported by medical helicopter to Louisville area hospitals for treatment of serious injuries.  The five-year-old, along with a 12-year-old male juvenile, were transported by ground ambulance to Norton Children’s Hospital, in Louisville, Kentucky for treatment.  Four other occupants of the vehicle declined medical attention at the scene.

The crash investigation is ongoing by Trooper Simpkins, with the assistance of the Indiana State Police-Versailles Crash Reconstruction Team.

Alcohol and drugs are not suspected in the crash although toxicology results are pending at this time.

The northbound lanes of I-65 were closed for approximately three hours for crash investigation and cleanup.