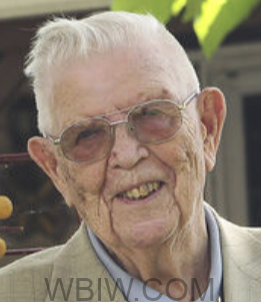 Dick was a member and elder of Fairview Church, a 60-year member of American Legion Gillen
Post #33 and a U. S. Navy veteran of the Korean Conflict. He retired from General Motors and
Stone City Bank as a Maintenance Supervisor.

Visitation for Dick will be held from 11:00 a.m. until 1:00 p.m., Friday, Sept. 17, 2021, at the Ferguson-Lee Chapel of Thorne-George Family Funeral Homes in Bedford. The funeral service will immediately follow visitation at 1:00 p.m., at the funeral home, with Pastor Lindy Hopkins officiating. Burial will follow in Beech Grove Cemetery with military rites accorded graveside by American
Legion Gillen Post #33.