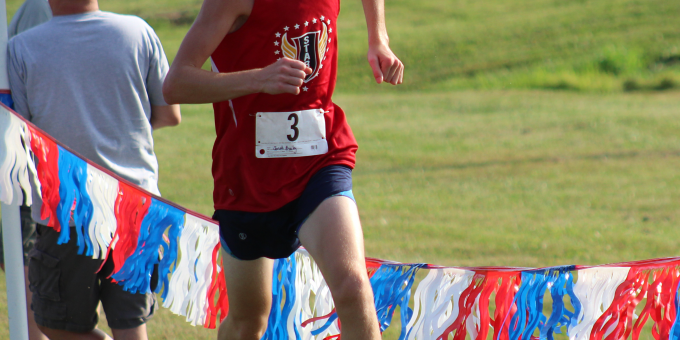 BEDFORD – Maybe he’s not old enough to know better, or just a little fearless. Bedford North Lawrence freshman Jonah Bailey was the first to cross the finish line on his tough home layout, two laps that total five grueling kilometers, and told his coach “I love this course.”

He’s probably the first to ever say that. Or he might be the horse for the course, especially when he’s able to work in open space.

Bailey adjusted his strategy for the rare mid-week dual meet with Martinsville, charging out faster rather than holding back something in reserve. He took over the lead midway through the race and churned home while leading the Stars to an 18-45 victory over the Artesians on Tuesday afternoon.

BNL’s Grace Tanksley won the girls race, but the Artesians swept the next five spots for a 20-44 triumph.

Bailey chased down Martinsville’s Griffin Worzella as the front pack emerged from the trees on the south end of the course, and he never looked back while roaring home in 18:41.5. Colton Sons was second in 18:55.5, and Zane Thompson was third in 19:13.3. Bailey was the lead BNL runner for the second time this season.

“He told me he really loves our course, and most people never say they love it,” BNL coach Jon Calhoun said. “I was really happy with him. He really took it on, that back half of the first lap, and never really looked back. I was really impressed by his effort.

“I think he really liked the openness of it. He felt kind of boxed in and claustrophobic in the last meet. This opened up for him.”

With less traffic to navigate, Bailey could relax and focus on catching Worzella.

“I went harder at the beginning, and that got me going,” Bailey said. “He was haulin’ at the start. It was hard to catch up to him, but I got him.”

Tanksley was not going to be caught. She powered away early and won in 21:29.1. Racing alone is more difficult than battling a crowd, because the mind can play tricks. “It’s like telling you, ‘You can slow down a little bit,’” Tanksley said. She didn’t fall for that temptation.

“It was rough,” Tanksley said. “By yourself, you have no one to lock on. It’s hard to fight that. You just lock on the next post (that marks the course).”

BNL will compete in the Jennings County Invitational on Saturday.