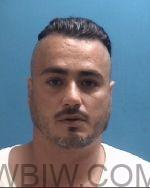 BARTHOLOMEW CO. — Detectives in Bartholomew County found the remains of a missing Columbus woman Thursday in a shallow grave, and her boyfriend is being charged with murder.

The remains of 37-year-old Heather Ann Steuver, of Columbus, were found just off of County Road 400 North between U.S. 31 and River Road. She had been missing since Aug. 22nd. According to Bartholomew County Coroner Clayton Nolting, Steuver died of blunt force trauma to the head.

Detective Kevin Abner thought there were suspicious circumstances around her disappearance.

During the investigation, her boyfriend 38-year-old Patrick E. Doyle, of Columbus, was arrested and taken to jail on a preliminary charge of possession of child pornography. He now is facing a charge of murder.