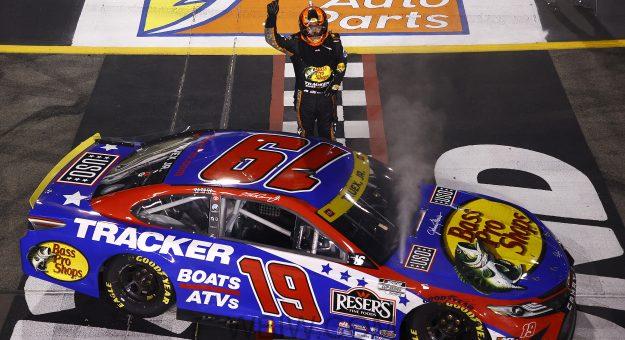 RICHMOND – Martin Truex Jr. won the Federated Auto Parts 400 Salute to First Responders to score his 31st career NASCAR Cup Series victory, his fourth of the season, and his third at Richmond. His margin over second-place Denny Hamlin was 1.417 seconds.

There were five caution periods for a total of 30 laps.

Only nine of the 37 drivers in the Federated Auto Parts 400 Salute to First Responders finished on the lead lap.

“This was one of my best runs at Richmond, for sure. I think we still have a long way to go, but I don’t hate it as much as I used to,” Briscoe said. It certainly helps when the car is handling the way it’s supposed to. The result doesn’t show the effort put in and how strong we were, but I feel like it was something that I can build on now that I kind of understand how to drive the track.”

The Cummins/Rush Truck Centers driver said his Ford Mustang was tight across the center and lacking forward when the field was slowed under yellow for the lap-30 competition caution. He pitted for tires, fuel, and a track bar adjustment and restarted in the 25th position on lap 37.

With a handful of the leaders restarting in the rear after receiving pit-road penalties, Briscoe slipped back to the 26th position. He ultimately moved back into 25th at the conclusion of the first stage.

At the break, Briscoe brought the No. 14 Ford Mustang to pit road for tires, fuel, and an air pressure adjustment to help with forward drive off of turn four. He restarted 19th for the second stage.

The Cummins/Rush Truck Centers driver was running 18th when the field began to make green-flag stops on lap 130. He brought his Ford Mustang to pit road on lap 132 for tires, fuel, and additional adjustments, though he said the handling of his car had improved.

Briscoe rejoined the field in the 20th position.

On lap 182, Briscoe pitted from 15th to make a scheduled green-flag pit stop for fresh tires. He returned to the track in the 20th position, one lap down, and drove his way into the 16th spot before the end of the second stage on lap 235.

Briscoe pitted for tires, fuel, and a slight air pressure adjustment at the stage break, but he told the team he was happy with the handling of the Cummins/Rush Truck Centers Mustang.

The Cup Series rookie driver started the final stage in 15th, the first car one lap down. On the initial start on lap 245, he lost the Lucky Dog position to Austin Dillon.

When the fifth caution of the race occurred on lap 251, Briscoe stayed on track to restart 15th on lap 255.

● Briscoe made a scheduled stop under green on lap 293. He pitted from the 17th position for tires, fuel, and no adjustments. The Cummins/Rush Truck Centers driver made his final green-flag stop on lap 342. His Ford fired off too tight, and he asked for an air pressure adjustment to help with his front turn.

Briscoe was in 19th place once the green-flag pit stop cycle was complete, and he picked up three positions before the checkered flag.

Briscoe was the highest finishing NASCAR Cup Series rookie for the 24th time this season.

Briscoe’s 16th-place result bettered his previous best finish at Richmond – 22nd, earned in the series’ prior race at the track in April.

Playoff Standings (with one race to go before Round of 12):

The next event on the NASCAR Cup Series schedule is the Bass Pro Shops Night Race on Saturday, Sept. 18 at Bristol (Tenn.) Motor Speedway. It is the third race of the 10-race playoffs and the last race in the Round of 16. It starts at 7:30 p.m. EDT with live coverage provided by NBCSN and SiriusXM NASCAR Radio.