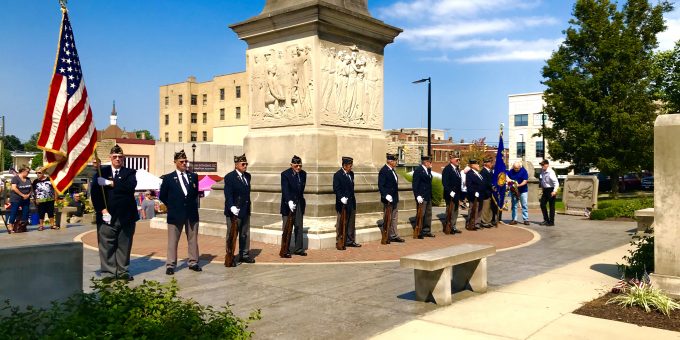 LAWRENCE CO. – Across the United States there were memorial services held to reflect on 9/11, a day when the US was attacked on American soil.

In Bedford, it was no different with festivities paying tribute to those that lost their lives on that fateful day.

Bedford Fire Department had flags placed at the 9/11 Memorial at their headquarter fire station on H Street.

The Festival of Heroes was held on the courthouse square honoring our military men and women along with those who protect our homeland here in communities across our country. The role of police officers, firefighters or ambulance personnel are all vital to our community and play a critical role in keeping us safe and protected.

During the Festival of Heroes the community honored Indiana State Trooper Roger Gillespie who died in the line of duty on June 8, 1962, and Lance Corporal Brian Lane, who died on February 27, 1991, at the Battle of Kuwait International Airport.

Lane served with members from the 2nd and 3rd Battalion in the 7th Marine Regiment and was tasked with clearing mines. The Marines helped support a force of tanks and armored vehicles that advanced on the airport.

The forces encountered resistance with remnants of the Iraqi force. During this battle, Lane along with 18 other Marines died. Lane died during an explosive blast.

Beverly Oliver, Corporal Lane’s mother, and Dennis Oliver his step-father laid a wreath at the Veterans Memorials as a symbol to remember Corporal Lane and other soldiers who did not return home from war.

Holding back tears, Beverly Oliver talked about 9/11 and her son.

“Just thinking about 9/11, you remember the things that are burned in our memories,” said Beverly.

“This is a big honor to be here today not only for 9/11 but also for Brian and all the other boys that did not make it back. This also honors both of our dads who also served in the Army,” said Dennis Oliver.

“Brian could be very contrary, my brother was a Marine and he decided he wanted to be a Marine. I am still able to stay in contact with the group he was with. I stay in touch with them, and they would send pictures of Brian and this makes me cry, but it is a good cry. Especially, when you see his smile. Brian had such a beautiful smile, and he was so well respected by the men he served with,” said Beverly.

“He always knew when he was growing up he was going to be a Marine,” said Dennis Oliver.

For the Olivers, it was such an honor to be asked to lay the wreath down and to honor Brian’s service to his country.

“This is just good, we just have always asked that they not forget Brian, where he was at and what he had done, and what he stood for,” concluded Dennis.

“Let’s just never forget this day, and our military and veterans,” said Beverly.

While Robert’s grandson Danny Gillespie played the bagpipes, and ISP Trooper Gillespie’s grandson Samuel Gillespie, who is also an Indiana State Trooper, laid a wreath at the Peace Officers Memorial.

The members of Gillen Post # 33 Honor Guard attended with Jim Kirkman playing the “National Anthem” and “Taps”. Law Enforcement officers from Lawrence County and Indiana State Police along with the Oolitic Volunteer Fire Department attended Saturday’s event. A mock disaster drill held in Mitchell kept many responders from being able to attend.

Indiana State Trooper Greg Day gave remarks on what the day meant and said, “truly there are many heroes among us”.