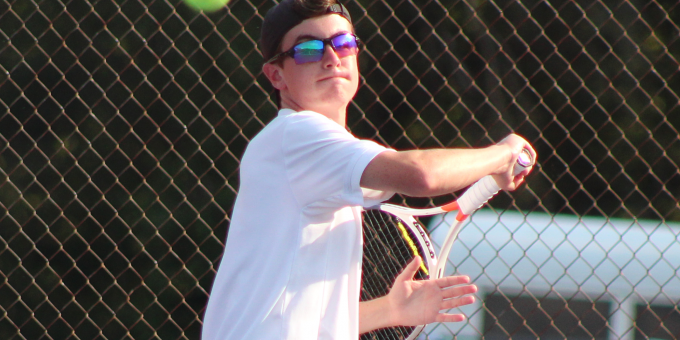 BEDFORD – Who’s that behind those Foster Grants? Well, the cool kids don’t wear that brand of sunglasses any more, and Graham Turner dons his shades for extreme light sensitivity, rather than earning ‘lit’ points for style. His game is bright enough.

Turner, with his trademark Oakley sports lens cutting down the glare, saw his way clear for a straight-set victory at No.2 singles as Bedford North Lawrence turned out the lights on Paoli 4-1 on Monday afternoon. The Stars, even with a lineup shuffle, swept the doubles with impressive wins while pushing their record to 6-7.

Maybe his future is so bright Turner has to wear shades. Actually, particularly when he’s serving into the sun, without the sunglasses Turner would spend too much time squinting to perform well. Missing the ball would be a great possibility. Blinded by the light? Nah, he was revved up as the deuce. He didn’t miss much. His game, based on low, driving shots and movement, was switched on as he shut off Lucas Stroud 6-3, 6-2.

“I left like I was being more consistent with the ball, making smarter plays,” Turner said. “I really like to move them around a lot. It’s ball placement and keeping it in as much as possible.”

BNL’s also won at No.3 singles with Caleb Jones, switched over from doubles for BNL’s first lineup change that was not dictated by quarantine, winning a first-set tiebreaker en route to a 7-6 (7-3), 6-3 win over Max Bostock.

The Jones move meant Nate Pemberton had a new partner at No.2 doubles. He teamed with Carter Kimmel for BNL’s fastest and easiest win, a 6-1, 6-0 triumph over Adin Monroe and Kander Phelps.

“I didn’t have to adjust at all,” Pemberton said. “Carter adjusted pretty well, after coming from singles to doubles. He played great, and it was great teamwork all around. We kept consistent shots and serves, kept putting it where they weren’t, and it was working.”

BNL’s most impressive win came at No.1 doubles. Paoli’s William Milner could unleash a serve that had to register triple digits on a speed gun, but Cameron Gratzer and Jayden Kemp were exquisite with passing shots while prevailing in a 6-4, 6-3 battle with Milner and Ray Minton.

“When someone serves that hard, you pretty much guess which way to go as he hits it,” Gratzer said. “When they gave us the shot to set up for a pass, we got it. We stayed consistent.”

The Rams (6-7) got on the board at No.1 singles. Isaac McBride, who won some key points with sheer hustle and energy to chase down shots that looked to be winners, edged Steven Graham 6-3, 6-4.