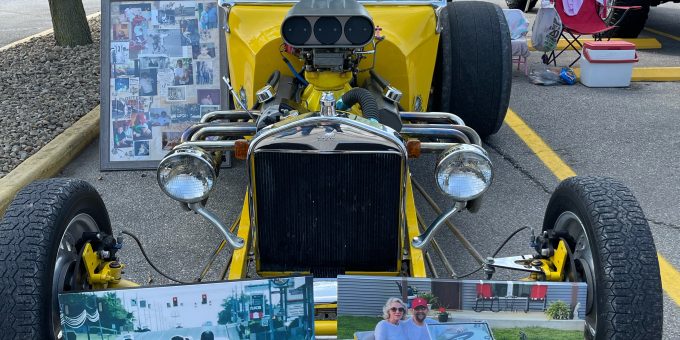 BEDFORD – Bill Tincher was devoted to the Bedford Parks Department and was instrumental in organizing the Bedford Parks Department Car Show. It was determined the car show would be a fundraiser where the proceeds would be used to help with programs and support the parks. Soon after, he then partnered with Southern Indiana Classic Hits 105.5 WQRK to assist him with marketing and entertainment elements.

This past Saturday was a “bittersweet” day for Bill’s family members. Bill Tincher passed away in July of 2021, but the sun literally did shine down on the family, and in a special way it was Bill’s way of smiling down on them saying “yes” this is how I want my legacy to carry on.

In 1965, Bill joined Ray and Sue Godsey’s household. During that time his love for racing was fueled. His passion for cars continued to grow as he got older, and that sparked the start of the Bedford Parks Department Annual Car Show in 2007.

Aside from automobiles, he also enjoyed all things sports, especially IU basketball. Bill spent and contributed many hours volunteering with local youth teams. He was well known for his time as a coach and umpire within the community. Once her retired from the City of Bedford Parks Department, he went to work part-time at Auto Zone.

This spring Bill purchased his dream car, a 1923 T-Bucket from Evansville, Indiana at a block party.

Everyone would prefer to call Bill “Billy T” because of his love, interest and passion for the T-Bucket.

“His dream came true, a garage with a hot rod in it,” said Alissa Tincher his daughter. When Bill became sick he would sit out in the garage and gaze at the care, starting with the motor. He would just sit, watch it run, and listen to the sounds of the smooth motor.

“His big plan was to take it to car shows,” Alissa continued.

The car was a collaboration between Alissa and her fiance Shane Dorsett who also helped work on the car. There was a lot of time, love and detail put into his beloved vehicle.

“I do not think anyone had anything bad to say about my father, he was so passionate about the parks,” Bill spent almost 25 years working and caring for the parks. He was very instrumental in helping and seeing Murray Forest Park being opened.

“The two limestone pillars at the park my dad help get them installed,” Alissa concluded.

“My grandpa pretty much raised him since he was a little kid. He moved in with Ray and Sue Godsey around 1965,” said Sean Duke, who is the Godsey’s grandson.

“He was such an amazing man, the family was first and cars were second, he always put everybody above himself. When Sean was really sick with liver cancer, he would always call and check on him. Sean and Bill were sick at the same time. Bill would always say, I can not wallow in self-pity when there are other people who are sick,” said Teresa Godsey.

Bill would always bring a smile to people who would tell jokes at the race track.

Ray Godsey was a race car driver and ever since Bill came to live with the Godsey’s he worked in the pits and worked on the race cars to help prepare them for race day. This blossomed into a passion for Bill, according to Teresa and Sean.

Sean put a lot of time preparing his car for the car show on Saturday, despite his own illness setbacks.

“It was to honor a man that was such an influential part of our lives,” said Sean. This was Sean’s first car to feature, and the first major project to take on. Sean was moved that his first car show was in Bill’s memory. His desire is to keep the legacy and memory of Bill to continue on.

Saturday was the perfect day and perfect way to honor Bill Tincher and his love for cars.