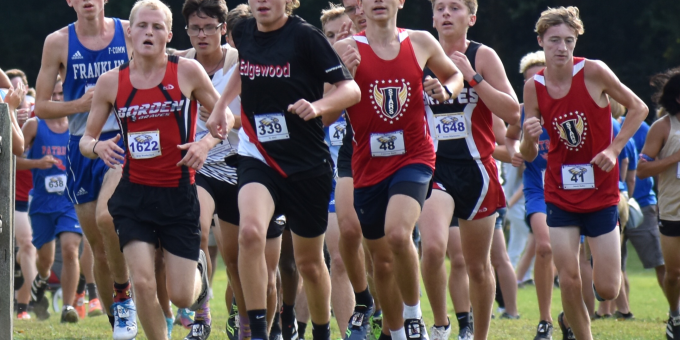 NASHVILLE – Bedford North Lawrence finished 10th in a 22-team field during the boys AA race in the Eagle Classic at Brown County on Saturday morning.

The Stars totaled 277 points on the fast, flat course, which will host the IHSAA semistate. Lawrence North won the AA event with 58. In the elite race, Columbus North won with 53 points.

“What a great day to pack it up,” BNL coach Jon Calhoun said. “Our 1-5 pack time was 22 seconds. In a field that really bunched up quickly, causing our team to get boxed in for around the first mile, our ability to pack it up was the highlight of the day.

“It was great to see, after working this year really hard, packing it up and working together pay off. We were one of the closest pack splits out of all of the races. Even though times were not there, we had more individuals in the 18s which shows signs of progressing in the right direction. Now it is the time to move that pack forward to faster times as we head to postseason.”

In the girls AA race, BNL was 15th among 20 teams with 413 points. Mt. Vernon (Fortville) won that team title with 86 points. Carmel won the girls elite race with 52 points.

“Grace continues to drop time compared to the same races in 2020,” BNL coach Jill Vance said. “We were hoping for a larger drop today, so she’s a little disappointed, but it’s hard to be upset with a top 25 finish.

“We got a look earlier this week at what Francesca might be capable of, when she dropped two minutes on a road course. Today she came close to matching that time on a grass course, which shows a lot of progress. Similar story for Tracey. Ella’s times have been steadily falling. Emma was one of the more consistent runners during the summer and has really stepped up her effort in practice. That has paid off for her.”

BNL will return to action on Tuesday in a rare regular-season home dual meet with Martinsville.