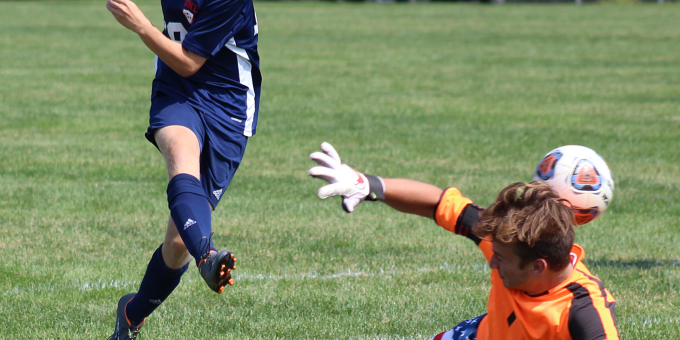 Like a submarine on the prowl, Cline surfaced at perfect times as Bedford North Lawrence sank the Cougars 8-0 on Saturday afternoon. Cline scored twice and set up two other goals as the Stars (5-3-2) recorded their second straight victory.

With scoring threat Josh Anderson still sidelined with a hand injury that required surgery, Cline had to get a little louder on the attack. He got the Stars started with a rebound goal in the first half, set up another with a corner kick, and scored early in the second half.

“We just took care of business,” Cline said. “It feels good to win. We have figured things out.

“I feel like we can’t just rely on Josh. I tried to incorporate our defense more into the play, tried to get them to bring the ball up and get into the attack.”

Cline’s first goal, after a slow BNL start, came at 13:09 as Trinity goalie Brayden Stockelman couldn’t control the first blast. That broke the cover on the net as the Stars exploded for four goals in the first half. Kaleb Sowders converted off a Billy Cline cross at 12:49, Clayton Burgess tallied off a Sowders assist at 3:36, and Karter West banged home the Danny Cline corner at 2:26.

“Danny had some nice touches, some nice shots,” BNL coach Logan Jackson said. “We need him to take those, hit those.”

After Cline added his second goal at 31:45, BNL kept up the pressure. Eric Meyer took a perfect Danny Cline through pass and beat Stockelman to the ball for a sharp goal with 23:26 left. Braydon Patterson made it 7-0 at 10:05 (via Billy Cline’s second assist), and Drew Davis finished the scoring at 2:20 with a slick one-touch move to beat a defender and rip home the shot.

“I liked to see us work the wings,” Jackson said. “We were a little too direct at times. We possessed the ball, and I wanted people to be really aggressive.

“This was a good day. It’s just confidence. We need to work on our touches, and part of it is mental, so we had a game today where we could refine that and be successful.”

BNL will return to action on Sept. 18, celebrating Senior Day when it hosts league rival Jeffersonville.