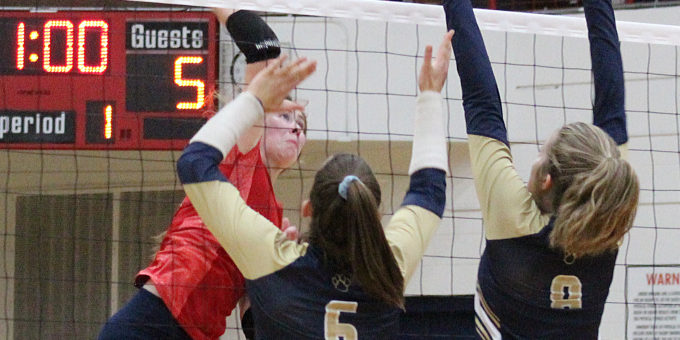 BEDFORD – With one breath, with one flow. Trinity Lutheran knows. Synchronicity.

The Cougars, ranked No.4 in Class A, were in sync, even with four freshmen policing the floor, while knocking down Bedford North Lawrence in three sets on Thursday night. Rookie stars Addison Darlage and Carson Bowling, working in tandem, were key figures as Trinity rolled to a 25-16, 25-15, 25-15 victory.

After the Stars made some noise with a first-set surge to an 11-9 advantage, the Cougars (12-4) clawed in front and stayed there. The youth was served during an 8-2 blast that propelled Trinity back in front. In volleyball terminology, the Cougars were ‘in system,’ which means the serve-receive pass was good enough that the setter (Darlage) had all of her attacking options available.

It’s a connecting principle, linked to the invisible, almost imperceptible. When it works, it’s smooth and perfect.

BNL (1-6 with four straight setbacks) had its moments, most notably a smashing 10-3 run to the forefront in the first set. In the third set, Carlee Kern’s service ace and Reva Tincher’s block of a spike at the net highlighted a second flow of excellence that got BNL within striking range. But Trinity steadied and swept aside the threat.

“We kept talking, we kept being scrappy,” BNL coach Gabrielle Arthur said. “The girls are tired of losing, too. So this was good momentum.

“I’m super proud of how we played. Everyone who was on the court started playing really well together. We started to build momentum. We defended well, and our offense really came together. That was something we’ve been missing.”

Trinity didn’t miss much, even with all the kids in key positions. Junior middle hitter Bailey Tabeling had 13 kills, senior Ruthie Bingham added 6 kills, but the rest of the heavy lifting was done by rookies: Darlage had 31 assists and two aces, Bowling knocked down 6 kills, outside hitter Madison Keith was a force at the net.

“We don’t get extra points for playing freshmen,” Trinity coach Faith Wilder-Newland said. “They have to do their job. They’ve been very efficient, they haven’t had breaks in their mental toughness. I’m very proud of them. Everybody has to do their job, and we’ll be fine.”

“When you have people putting up that many points, it makes a huge difference,” Arthur said.

Both teams will return to BNL Fieldhouse for the four-team BNL Invitational on Saturday. The Stars will face Evansville Mater Dei in the opening round at 10 a.m., while Trinity will clash with Terre Haute South. The first-round losers will meet in the consolation, while the winners will collide in the final.