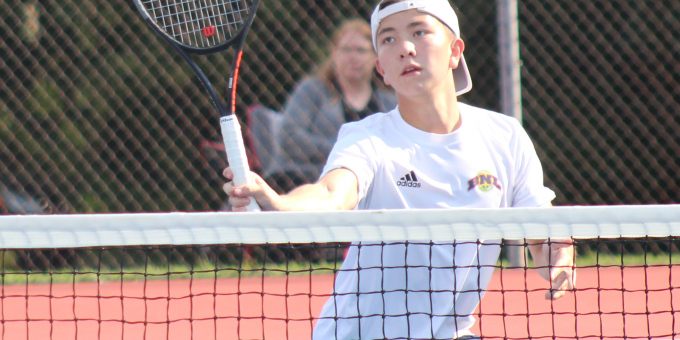 BEDFORD – Donnie Thomas, wearing enemy colors, made a triumphant return to the asphalt courts at Bedford North Lawrence. Victory is sweet, especially this one – even if it didn’t feel like it.

After coaching the Stars for a decade, Thomas guided Brownstown to a thrilling 3-2 victory over the Stars on Thursday afternoon. The Braves (6-3) swept the singles, including the decisive three-set battle at No.2, for a win that was bittersweet for the former BNL boss.

“I can’t say I didn’t want to win, but it didn’t feel like I thought it would,” Thomas said. “It was really hard to root against kids I’ve been around for two or three years, or more. Just sitting here telling you this, it’s still tough.

The deciding team point was recorded by Brownstown’s Pierson Wheeler, who rallied from a 4-3 deficit in the final set for a 6-2, 3-6, 6-4 triumph over Graham Turner.

“This was a close one between two evenly matched teams,” BNL coach Chris Kurtz said. “It was fairly clear early on that the match would come down to No.2 singles. Pierson hung right in and got everything back, eventually winning the final three games.

“It never feels good to come up on the short end of a match like this. But I am really happy for Donnie. He has meant so much to tennis in this community for a long time. All the players on the court tonight have been coached by Donnie, they are all his guys, so I’m sure this one means more than most. He will remember it for a long, long time. A well deserved win for sure.”

The Braves were dominant on the other singles courts as Ethan Davis topped Steven Graham 6-1, 6-1 at No.1, while Smith Hackman halted Carter Kimmel 6-2, 6-0 at No.3.

BNL (4-6) cruised on both doubles courts. Cameron Gratzer and Jayden Kemp rolled past Conner Gwin and Bryce Reasor 6-2, 6-2 at No.1, while Caleb Jones and Nate Pemberton handled Grant Elliot and Ethan Garland 6-4, 6-2 at No.2.

The Stars will compete in the Edgewood Invitational on Saturday.