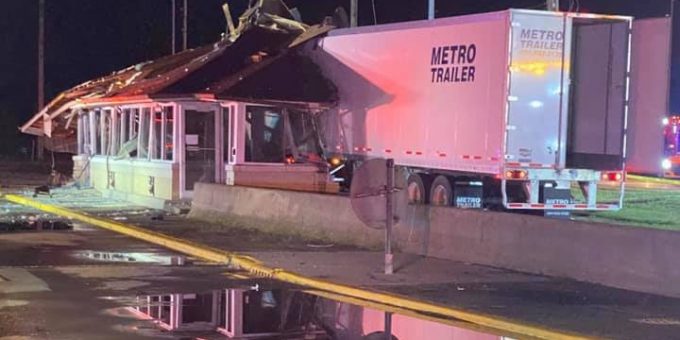 WEST HARRISON – Wednesday morning, shortly after 5:00 a.m., the Indiana State Police responded to a single-vehicle crash at the I-74 Weigh Station in northern Dearborn County where a semi drove into the scale house, resulting in the death of the driver.

The initial investigation by the Indiana State Police-Versailles Crash Reconstruction Team indicated that a 2021 Freightliner semi pulling a box trailer, being driven by 63-year-old James G. Bristol, of Jefferson City, Tennessee was traveling westbound on I-74 near the 171-mile marker, near the Indiana/Ohio state line.

For an unknown reason, the vehicle left the travel portion of the roadway.  The vehicle entered the I-74 weigh station where it then drove into the scale house.  The semi came to rest inside of the building.  Tow trucks were called to the scene to pull the truck away from the building to gain access to the driver.  When Bristol was located, he was found to have sustained fatal injuries.  He was pronounced deceased at the scene by the Dearborn County Coroner’s Office.  The building was destroyed in the collision.

Information obtained by investigators indicated that a medical issue may have played a role in the crash.  Drugs and alcohol are not suspected to be factors in the crash.  An autopsy on the driver is pending.  The scale house was unoccupied at the time of the collision.