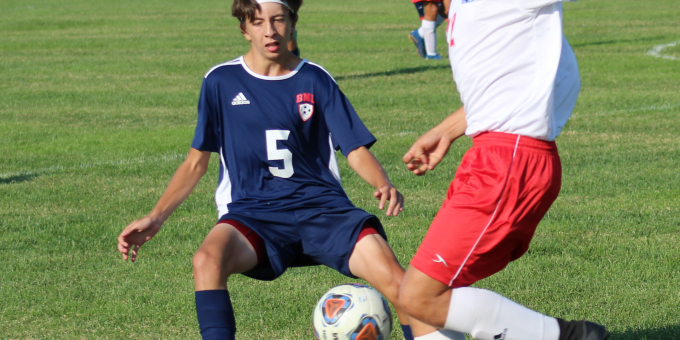 BEDFORD – That first goal is always memorable. For Bedford North Lawrence freshman Adriano Sullivan, it was golden, a storybook way to make his mark.

Sullivan’s sharp score with 5:27 left was the game winner as the Stars shot down Jennings County 2-1 on Thursday afternoon. Danny Cline produced the first goal as BNL posted its first Hoosier Hills Conference victory of the season.

He doesn’t look big enough to be eligible for high school, nor quick enough for the faster pace of the varsity game, but Sullivan was huge in the biggest moment. He executed a perfect give-and-go passing sequence with teammate Karter West, who set up Sullivan for a 15-yard blast in front of Jennings goalie Carson McNulty. Sullivan’s bullet shot nestled into the lower left corner of the net.

”That was an amazing pass,” Sullivan said. “Everything just felt so good when I made it. There are no words for it.”

“He has started to really come on,” BNL coach Logan Jackson said. “He did a good job of possessing in that middle spot, and he did exactly what we asked him to do. Distribute it. He made a nice pass to Karter, who got it back to him, and he got a nice goal out of it.”

BNL’s attack needed a boost. The Stars, struggling to maintain possessions in the midfield, managed only three shots in the first half while scuffling to a 0-0 deadlock. The Panthers (5-3-0, 0-2-0 in the HHC) had the better scoring chances.

“At one point, I counted that we didn’t get more than two passes,” Jackson said. “I don’t know what our deal is lately. We go in spurts. In the first half we struggled. We whiffed on some, we had some heavy touches. The second half was much better.”

Cline got the Stars started with a sizzling goal, a 25-yard blast with 31:20 left. But Jennings came back with a beautiful corner kick from Nathan Davis, who connected with Ian Sawyer for a header goal past BNL’s Tanner Robbins at 26:38.

That set the stage for Sullivan’s debut in the scoring column.

“That was one we needed to win,” Jackson said. “I was a little worried.”