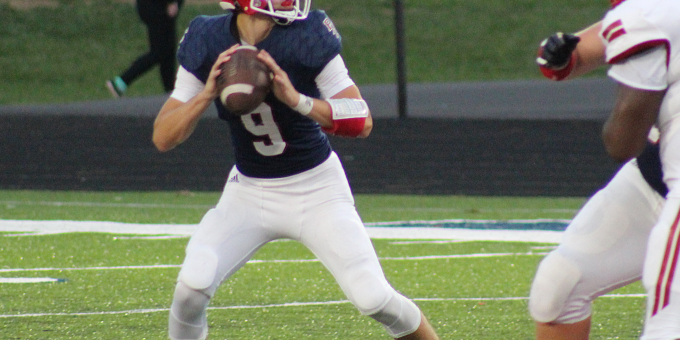 BEDFORD – For the first time in almost two decades, the top tier of the Hoosier Hills Conference standings features new frontrunners. Perhaps that’s a misprint? Maybe everyone thought, after 17 years, Columbus East was lodged there in perpetuity. After 96 consecutive league victories, that was a fair assumption.

Yet, after three weeks of the regular season, after rubbing the eyes to make sure the vision is accurate, after a stunning upset of epic proportions, the league summit is shared by Bedford North Lawrence and New Albany. And following Friday night’s clash at Stars Stadium, only one will remain perched on the pinnacle.

With the lead – precarious it might be, with so many weeks remaining – in the HHC at stake, the Stars and Bulldogs will collide to determine the identity of the most dangerous threat to East’s dynasty. BNL (1-2) and New Albany (1-2) are both 1-0 in a league that is more balanced and unpredictable than any point in the last 20 years. Who will ultimately win the title? Who knows. The only certainty will be the status of the victor.

Bigger games have been, and will be, played. But the importance of this mid-season battle exploded tenfold following East’s shocking, streak-busting loss at Seymour last week. East could still win the conference, so rumors of its demise are obviously premature, as would be crowning the BNL-New Albany winner as eventual champion. However, the survivor will be firmly in the driver’s seat, destiny in hand.

“We know it’s a big game,” BNL coach Derrick Barker said. “There are a lot of teams competing for the top spot, we just have to take care of business one week at a time. It would be awesome to win and be in that position, but then you’re right back in there. The conference is good enough, if you start looking past the team you’re playing, you’ll get caught.

“We can’t worry about that. We have our hands full with how good New Albany is.”

How good are the Dogs? Good question, difficult to answer. The two losses came against state powers Bloomington South (50-20) and Gibson Southern (63-24). South is ranked No.6 in Class 5A, Gibson is No.1 in 3A, so that competition level is staggering. New Albany’s win was a 48-6 thrashing of struggling Jennings County last week.

“You can’t look at their record,” Barker said. “They’re good. For a 1-2 team, they’re definitely a lot better than that record.”

New Albany’s strength, an explosive passing attack and dynamic offense, plays directly to BNL’s weakness from the first three weeks. The Stars have been susceptible through the air, and the Dogs can definitely fly. Wide receiver Ja’raylan Johnson ranks second in the state with 23 catches for 451 yards and 5 touchdowns, while quarterback Derrell Simmons has completed 47 of 70 for 704 yards and 8 TDs to rank 13th in the state.

Last week, Johnson had three receptions – all for touchdowns – that totaled 149 yards. Simmons was 9 of 14 with 4 scores before New Albany called off the dogs during the running clock in the second half.

“They’re explosive, they have the speed,” Barker said. “They go up and get the ball. And their run game is really good. Their quarterback can throw it a mile, but he can also do things with his feet. If we give them time to extend plays, they’re going to get open. There’s a lot to take in.

“We can’t let guys behind us. We have to limit the big, explosive plays. That’s what they’re good at and they will take some shots. We have to keep everything in front, not let them use their speed to get by us.”

BNL has been burned by Martinsville and Bloomington North with big-play passing attacks, and even last week against Jeffersonville. Martinsville’s Tyler Adkins completed 21 of 34 for 218 yards and 3 TDs, North’s Reece Lozano was 14 of 19 passing for 211 yards, and Jeffersonville’s Davarhy Julian caught five passes for 143 yards and a touchdown. That will be New Albany’s first phase of attack, although the Dogs are also deadly with the kick return game (Kyondre Winford returned the opening kickoff 97 yards against JC and added 97 rushing yards).

But BNL, with multiple weapons, has come of age offensively the last two weeks, with sophomore quarterback Memphis Louden (559 passing yards and 4 touchdowns) getting more comfortable with each series. The Stars also have big-play capability with receivers Ryker Hughes and Dylan Nikirk, with running back Zane Anderson, with jack-of-all-trades Brye Lewis. The Stars also showed vast improvement defensively against the Devils.

“It starts with Louden at quarterback,” New Albany coach Steve Cooley said. “We have to keep him in the pocket. And with the option stuff, they have the ability to make plays. We can’t get lulled to sleep on the play-action pass.

“It’s a very interesting game. They’re playing well, they had a big win over Jeffersonville. We’ll find out where we are. Our best football is ahead of us.“

This meeting will have to hustle to match the previous two encounters. BNL prevailed 42-41 in double overtime in 2017, then escaped with a exhilarating 41-40 win the next season when McCall Ray scored from five yards on the final play of the game. Ray was the hero that night while completing 16 of 25 passes for 294 yards and 3 TDs (plus two rushing scores) and Drew Shoufler caught 8 passes for 168 yards and two TDs.

The teams were scheduled to collide in last year’s 5A sectional, but BNL was forced to withdraw from the postseason when COVID-19 struck the coaching staff the week before the semifinal.

Is another high-scoring, hold-the-breath encounter on the horizon? BNL would rather plod to a win with ball control rather than rely on prevailing in a shootout. But the Stars are oozing confidence following the 48-13 triumph over Jeffersonville last week. That momentum is huge, especially now with the added weight of this week’s dogfight.

“We got some confidence, we’re feeling good about what we’re doing,” Barker said. “Getting to believe in themselves is a big thing, keep working hard and see the fruits of that labor.

“We have to control the ball offensively. We can’t turn it over, can’t give them extra positions, limit the explosive plays. They’re dangerous in the return game, so we have to tackle well and keep the ball in front of us. Make them drive the field.”

BNL is chasing its first HHC title since 2006, when it shared the crown with East.

Last meeting: During the 2018 season, McCall Ray scored on the final play of the game, giving the Stars a thrilling 41-40 victory. Ray threw for 294 yards and 3 touchdowns while scoring two more. Drew Shoufler caught 8 passes for 168 yards and 2 TDs.