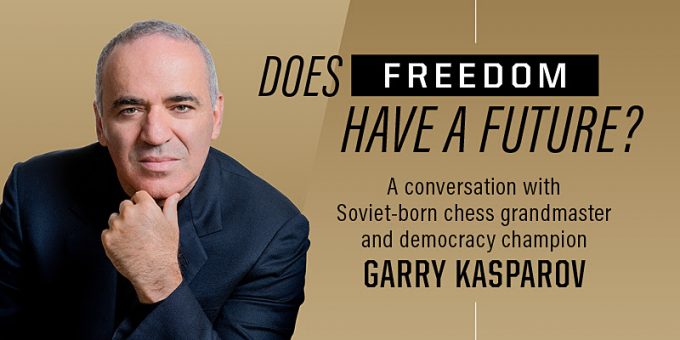 “Does Freedom Have a Future? A Conversation with Soviet-born Chess Grandmaster and Democracy Champion Garry Kasparov”

Kasparov will join Purdue President Mitch Daniels at 6:30 p.m. Tuesday (Sept. 14) in Stewart Center’s Loeb Playhouse for an hour-long discussion on democracy in the 21st century. The event is free and open to the public and will be live-streamed simultaneously on Purdue’s YouTube channel.

Before joining the vanguard of the Russian pro-democracy movement in 2005, Soviet-born Kasparov spent 20 years as the world’s top-rated chess player, finding international fame at the age of 22 when he became the youngest world chess champion in history in 1985. Previously, he earned the titles of under-18 chess champion of the USSR at the age of 12 and world under-20 champion at 17.

Kasparov was one of the first prominent Soviets to call for democratic and market reforms. In 2012, he was named chairman of the New York-based Human Rights Foundation, succeeding Václav Havel. Facing imminent arrest during Vladimir Putin’s crackdown, Kasparov moved from Moscow to New York City in 2013, after having previously escaped violence in his native Azerbaijan in 1990.

In 2017, Kasparov founded the Renew Democracy Initiative, dedicated to promoting the principles of the free world. Bringing together figures on the center-left and the center-right, the nonpartisan RDI has launched programs to support civics education, integrity in public office, and the vital importance of engaged citizenry in a democracy.

“Unsettling: A Conversation About Climate and Energy”

Koonin will join Daniels at 6:30 p.m. on October 19th in Stewart Center’s Fowler Hall for an hour-long conversation on the current state of climate science. A book signing for Koonin’s latest publication, “Unsettled: What Climate Science Tells Us, What It Doesn’t, and Why It Matters,” will be held in the Stewart Center lobby outside Fowler Hall prior to the event. The conversation and book signing are both free and open to the public, with a simultaneous live stream of the conversation on Purdue’s YouTube channel beginning at 6:30 p.m.

Koonin is a professor at New York University, where he founded NYU’s Center for Urban Science and Progress, which focuses research and education on the acquisition, integration, and analysis of big data for big cities. He served as undersecretary for science in the U.S. Department of Energy under President Barack Obama from 2009 to 2011, and in 2011 was lead author of both the U.S. Department of Energy’s Strategic Plan and the inaugural Department of Energy Quadrennial Technology Review. Before that, he was chief scientist at BP and a professor of theoretical physics at the California Institute of Technology. He is a member of the National Academy of Sciences, the American Academy of Arts and Sciences, and JASON, an independent group of scientists that advises the U.S. government on matters of science and technology.

Attendees at these events should be aware of and follow all posted Protect Purdue COVID-19 guidelines, including current face mask requirements.

Launched in 2014, the Presidential Lecture Series exposes Purdue students and the broader community to inspiring ideas, courageous leadership, and models of civic engagement and civil discourse.

Receive information on these and future Presidential Lecture Series events by signing up online.