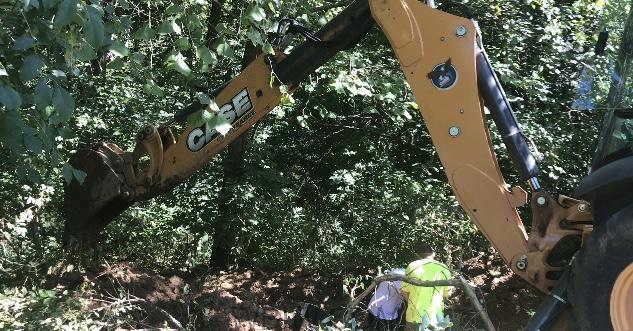 Residents in Oolitic notified crews of the loss of water pressure on Sunday and it took crews until 3:00 a.m. to locate the leak. Originally, it was thought there were two leaks. However, after follow up investigation the leak appeared to only to be in a 6 inch mainline that feeds into Rolling Acres Housing addition.

At first, the whole town was affected by the leak with little or no water pressure. After finding the leak crews were able to shut off water to isolated areas in the Rolling Acres addition which affected approximately 100 customers.

Town residents were inconvenienced by the water leak during the holiday, but Oolitic resident Dan Brooks appreciated the work of the town crews.

“These guys do excellent work, surprised to see these gentlemen out early this morning, I know the water is coming back,” said Dan Brooks in which the leak was located behind his house.

The water leak was fixed at 4: 15 p.m. Monday afternoon. A boil order will be in effect for the Town of Oolitic at least until Wednesday. The boil order may be extended depending on the testing.

The town have looked into obtaining upgraded meters that will allow crews to be will be notified faster and will also help them locate the leak within minutes rather than hours. Notification will be made via cell phones and set off alerts to notify crews, which will reduce the amount of water loss to the town once the town obtains these new meters.

The Town of Oolitic receives its water from the City of Bedford and does not have its own water tank.