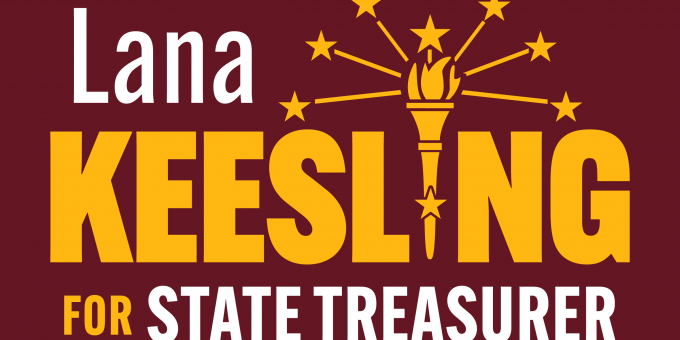 Keesling was elected City Clerk in 2015 and re-elected in 2019, proving herself an electable candidate in the state’s second-largest city. She was elected to turn around a city clerk’s office mired in scandal. Since taking office, she has turned the finances of the department around while standing up to intimidation efforts by Democratic city officials.

Prior to her election as City Clerk, Lana Keesling was the Chief Financial Officer of a large company managing finance, information technology, and human resources. Prior to that, she was a small business owner for ten years. She holds a Masters in Business Administration (MBA) degree, making her the most qualified candidate in the race for Treasurer.

“We don’t need big government solutions to improve the lives of Hoosiers,” said Keesling. “We need qualified, conservative checks on politicians to do the work and connect people to opportunity.”

Lana Keesling is a proud conservative who is vice-chair of the Allen County Republican Party, Past President of the Allen County Republican Women’s Group, and a member of the Downtown GOP Club. She was endorsed by Right to Life of Northeast Indiana in her two campaigns for City Clerk. Keesling is also a graduate of the Richard G. Lugar Excellence in Public Service program.

“Lana’s credentials for State Treasurer are impeccable,” said Allen County Republican Party Chairman Steve Shine. “She is a solidly conservative Republican, who is a proven vote-getter, as indicated by her convincing wins in a major metropolitan area often thought to lean Democrat. She is loyal to our party and taxpayers.”

Keesling has balanced her office budget without tax increases and helped increase city revenue by enforcing the law, not through tax increases. She also undertook an effort to invest in non-profit community organizations during the COVID-19 pandemic by utilizing retired parking meters to collect donations for nonprofits.

Lana and her husband, Robert Ketcham, enjoy time at the lake with their seven children and ten grandchildren. To learn more about Lana Keesling and her qualified conservative campaign for Indiana Treasurer, visit www.lanakeesling.com.