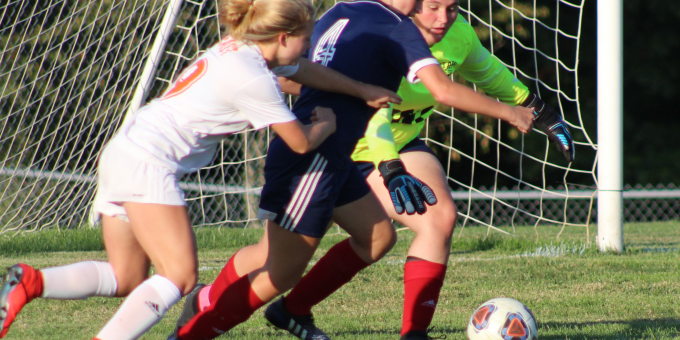 For the second straight match, after battling to respectability in the first half, the Stars wilted in the second. Of course, fatigue (with only 12 players seeing action) played a bigger factor than any rah-rah motivation Dufrense might be able to muster.

Columbus East, shuffling players as often as a casino dealer mixes the cards, exploded for five goals during the first 20 minutes of the second half to subdue the Stars 8-0 on Tuesday. Nadia Harris scored four times for the Olympians, who recorded the 200th career win for head coach Ilya Schwartzman.

BNL (0-4-1, 0-2-0 in the Hoosier Hills Conference) surrendered an early Harris goal, then kept East at bay for the final 37 minutes of the first half. But Harris struck at 39:38 of the second, opening the floodgates as BNL struggled to manufacture any offensive thrust.

Harris scored again at 33:32, dribbling smoothly between two defenders with fancy footwork in the penalty box and beating BNL goalie Crystal Webb with a sharp shot to the lower right corner. Two goals by Kathleen Soedel (29:44 and 27:41) gave East a 5-0 lead, and Harris completed her bonus hat trick with a beautiful lofted shot over Webb after chasing down a pass into the danger zone.

“They hung in there,” Dufresne said. “I know the score says otherwise, but we played a whole game. We came out with a little less intensity than we did in the first half. But I guarantee East’s coach wasn’t happy with them and they needed to dial it up a notch. They came out and executed on our fatigue, and we came out a little flat to get started. We will have to do something a little different to get us ready for the second half.”

With BNL unable to press forward, with her defense constricted around her to get as many offside calls as possible, Webb has under constant attack. And she made five diving saves, plus a block of a point-blank shot with her knees, to keep East from triggering the mercy-rule conclusion with a nine-goal difference.

“She’s very tough,” Dufresne, a former goalie, said. “We’re still working on goalkeeping skills and committing to the play. Getting big, getting down, using the body. She’s less hesitant, and I couldn’t be more proud of how far she’s come this season.”