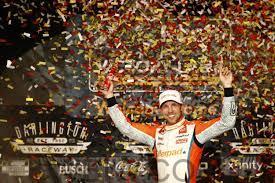 DARLINGTON – Denny Hamlin of Joe Gibbs Racing (Toyota) took his first win of the season at the Southern 500, officially known as the Cook Out Southern 500 for sponsorship reasons.

The NASCAR Cup Series stock car race at Darlington Raceway in Darlington, South Carolina is 501 miles and consists of 367 laps.

On a night where many NASCAR Cup Series playoff drivers were undone by wrecks and pit road miscues, Denny Hamlin stayed out of trouble and narrowly held off Kyle Larson.

Hamlin, who advances automatically to the Cup playoff Round of 12 with the victory, led the final 69 laps. But he was kept honest in the closing laps by Larson, who overtook him during the summer for the regular-season title.

Then on the final lap, Larson made one last charge. Through Turns 3 and 4, Larson repeatedly tagged the wall in a desperate attempt to pass Hamlin.

But Hamlin stayed against the wall himself, keeping Larson behind him off Turn 4 before beating him to the checkered flag by two-tenths of a second.

Just four laps into the race, Briscoe radioed to the team that the HighPoint.com/Founders Federal Credit Union Ford Mustang was too tight. He stayed on track during the first caution on lap 17 and restarted 19th, but the No. 14 quickly lost ground to cars on newer tires on the lap-20 restart.

The yellow flag was shown for the competition caution on lap 25 with Briscoe scored 27th. He pitted for tires, fuel, and a big chassis adjustment for his Ford Mustang and restarted 26th on lap 30.

Briscoe continued to battle a tight-handling Mustang as the first stage progressed and reported that adjustments made were not helping.

The HighPoint.com/Founders Federal Credit Union driver was 27th on lap 99 when he was passed by leader Denny Hamlin, placing the No. 14 team one lap down at the conclusion of the stage.

The HighPoint.com/Founders Federal Credit Union driver lined up 25th, one lap down, for the lap-123 restart after pitting for tires, fuel, and adjustments at the stage break. A caution on lap 126 allowed Briscoe to rejoin the lead lap in the 24th position. He made a lengthy pit stop under caution for additional adjustments.

Briscoe worked his way past lapped traffic and into the 22nd position before the leaders began making green-flag pit stops on lap 156. He pitted from the 12th spot on lap 159 for tires, fuel, and a wedge adjustment to help with rear grip.

Only five cars were on the lead lap when the yellow flag waved on lap 164 for debris. Briscoe and the rest of the leaders waved around to regain position on the lead lap, and he lined up 23rd for the lap-169 restart.

Briscoe was running 20th when the leaders began making scheduled green-flag stops on lap 194. He pitted on lap 198 for fresh tires and a front air pressure adjustment to help with rear grip in turns one and two. He returned to the track just before the caution flag was waved for the eighth time on lap 201 and was scored 21st.

The No. 14 Ford Mustang restarted 20th, and Briscoe bettered his position by one to finish the second stage in 19th.

At the stage break, Briscoe pitted for additional adjustments after telling the team his handling had been improving. But he said he needed help with rear grip on entry of in turn one to help give him the feeling he was looking for in the car.

The HighPoint.com/Founders Federal Credit Union driver made his first scheduled green-flag stop of the final stage on lap 271, giving up the 21st position to receive tires and a chassis adjustment. He reported to the team he fired off too tight, but the handling improved later in the run.

The stage remained green until the field was scheduled to make their second scheduled stop under green on lap 301. Briscoe told the team that his Ford Mustang was the best it had been on the long run. After pitting, Briscoe was scored 23rd, two laps down, and was able to drive around the leader to put himself just one lap down before the caution flag waved on lap 320.

Briscoe stayed on track during the caution and raced his way into the top-20 before the next caution on lap 327.

He restarted 20th on lap 332 and held his position. On the final lap, he made a pass for the 19th position just before taking the checkered flag.

“The HighPoint.com/Founders Federal Credit Union Ford Mustang was pretty good on the long run once we made some adjustments and the sun went down, but the handling just wasn’t where we needed it to be overall,” said Briscoe. “We’ve still got time to get a win before the season’s over. This was just an off day that we’ll move on from and try to keep improving over the next nine races.”

Briscoe was the highest finishing NASCAR Cup Series rookie for the 23rd time this season.

Playoff Standings (with two races to go before Round of 12):

The next event on the NASCAR Cup Series schedule is the Federated Auto Parts 400 Salute to First Responders on Saturday, Sept. 11, at Richmond (Va.) Raceway. The second race of the 10-race NASCAR Playoffs starts at 7:30 p.m. EDT with live coverage provided by NBCSN and SiriusXM NASCAR Radio.