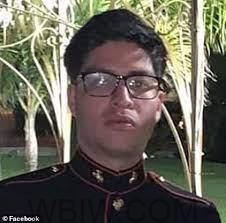 LOGANSPORT — The body of a Marine from northern Indiana who was killed in an attack at Afghanistan’s Kabul airport will be returned to Indiana next week.

Gundrum Funeral Home & Crematory in Logansport said Sanchez’s body will be transported home on Sept. 12. Details on funeral services are still being finalized.

Sanchez was among 17 members of his Logansport High School class who joined the military after their 2017 graduation. He played on the school’s varsity soccer team and was in the homecoming court his senior year, according to school officials.

Eleven Marines, one Navy sailor, and one Army soldier were among the dead, while 18 other U.S. service members were wounded in Thursday’s bombing, which also claimed the lives of more than 160 Afghans. Officials have blamed the bombing on Afghanistan’s offshoot of the Islamic State group.

The U.S. military said it was the most lethal day for American forces in Afghanistan since 2011.