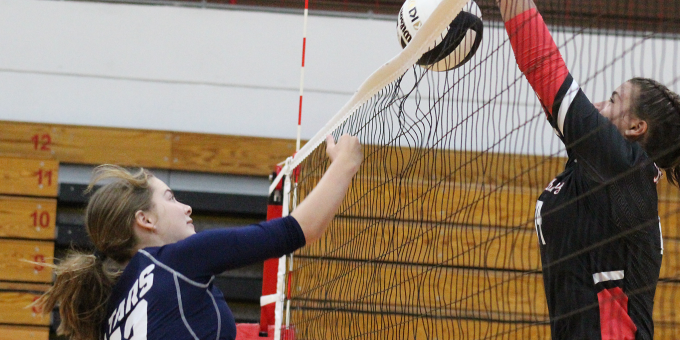 BEDFORD – While Bedford North Lawrence waited for its epiphany ‘click’ moment, New Albany’s Alexis Caldwell focused on her target and locked on. She rarely missed, and the Stars suffered from her powerful shots.

With Caldwell doing damage from the service line and the front line, the Bulldogs overwhelmed BNL in three sets on Tuesday night. Caldwell hammered out 8 service aces and 9 kills while propelling the Bulldogs to a 25-15, 25-11, 25-13 triumph.

The Stars (1-5, 0-2 in the Hoosier Hills Conference) lack that kind of firepower. They can play defense with the best, but eventually the pounding takes a toll. Without a response, they will break down and wear down. The better defense would be a good offense.

“Our defense is there,” BNL coach Gabrielle Arthur said. “Is it perfect? No. Is our serve receive perfect? No. But our offense isn’t putting the ball away like we need to be. We have to be swinging.

“Our effort is there, it’s just putting it all together. We’re really good at individually doing things, but we haven’t had that click moment where we’re all doing what we need to do at the same time. That’s what we lacked tonight.”

New Albany (9-1, 2-0 atop the league, with a huge clash with Floyd Central on the immediate horizon) didn’t lack much. After overcoming some overzealous attacking in the first asset, the Bulldogs were ferocious. Their bite matched their bark, and Caldwell was the loudest.

“She’s a stud,” New Albany coach Ryan Woosley said. “She just goes up and beats the snot out of it, and not many people can slow her down or stop her.

“We’re a really aggressive serving team. We pride ourselves in getting the opponent out of system. You live by the sword and die by the sword, and in the first set we missed a few trying to be aggressive. But throughout the match we dialed it in and gave them fits passing.”

Reese Tiesing and Kamori Knight added 8 kills each, with Cheyenne Palmer leading the way with 16 assists, up front for the Dogs. Tiesing added 4 aces, while Reese Stivers and Ashlyn Clifton had 10 digs apiece.

Maddy Bennett had 5 kills for the Stars, who spent too much time scrambling in a defensive mode to allow the offense to flow smoothly through setter Annie Waggoner.

“I’m not going to make excuses that the other team is just better,” Arthur said. “That won’t make them better. We just have to decide that we’re going to be on one night, that we’ll give more effort than the other team, that we will communicate more. Our schedule doesn’t get any easier.”

BNL will host Class A No.4 Trinity Lutheran on Thursday.