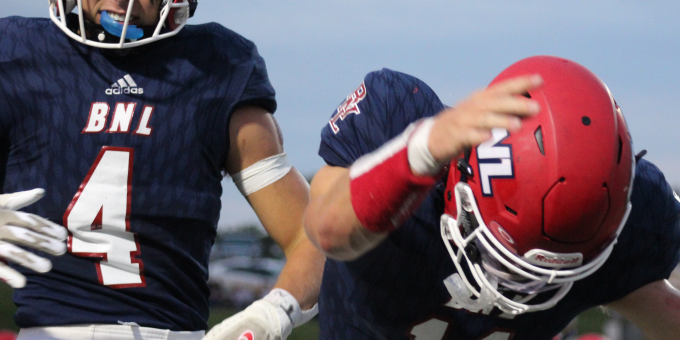 BEDFORD – The impact of one victory can be overemphasized, subject to prisoner-of-the-moment hyperbole, but that’s not the case with Bedford North Lawrence’s emphatic triumph over Jeffersonville on Friday night.

With so much at stake, with a huge crowd and ultra-enthusiastic student section, with the official dedication of the new turf field, with that giant American flag as inspiration over the north end zone, with an eight-game home losing streak as baggage, the Stars responded to that pressure with an outstanding performance to beat down a nemesis. What a night, from the cutting of the ribbon to the gift wrapping of Derrick Barker’s first W as the new head coach. It was needed, from so many perspectives.

Football success, probably more than other other sport, is a team triumph. There were so many big plays, until the running clock wiped away the final 16:37. Many get overlooked when the bulk of the attention – quite appropriately- goes to touchdowns. But there were multiple jolt snaps that might not be accounted for in a box score but were no less crucial.

So here’s a second look at a historic win:

Applause for BNL’s defensive front seven (Braxton Brown, Perry, Patterson, Terrell, Kaedyn Bennett, Whitaker and Lewis) for their run stoppage. Jeffersonville had two backs both go over 100 yards in its opening win over Seymour. The Devils didn’t total 100 as a team against the Stars, who had given up 100 points in the first two games. They were challenged and responded.

Applause for the offensive line, including Nic Mansker, Isaac Jackson, Garrett Hayes, Kline Woodward and freshman Junior Arellano, for their grunt work as Anderson got the glory for his four touchdowns.

While the entire state was stunned by Seymour’s 28-24 comeback win over Columbus East that ended a remarkable 96-game conference winning streak by the Olympians, it did not guarantee a new league champion. But it certainly opened the door for another to end East’s 17-yard stranglehold on the HHC crown.

The Stars are in position, with that opening league victory, to challenge for it. They must duplicate the effort and execution from last week – no momentum-killing turnovers, very few missed tackles or assignments, outstanding defense and big plays from the multiple offensive weapons on their disposal – to remain a factor until the final week of the regular season.

There’s a long way to go. The Stars are headed in the right direction.