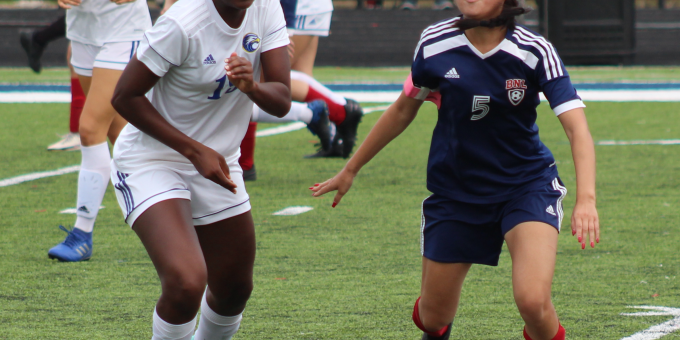 BEDFORD – Evansville Christian discovered a gaping hole in the middle of Bedford North Lawrence’s defensive front and exploited that attack to perfection.

The Eagles erupted for six goals in 20 minutes of the second half, flying away to a 9-0, mercy-rule victory over the Stars on Saturday afternoon. Tina Geer scored four goals as Evansville Christian remained undefeated (6-0-0) with an assault that found gaps down the center of the turf field.

“In the first half, we played defense,” said BNL coach Jackie Dufresne, whose club trailed 3-0 at halftime. “Then after the half, we came out flat-footed, not ready to play, a whole other team than the first half. We’ll have to change something if we want to stay in some games this season. We can’t give it up that easy and let them attack from the center.

“Those girls had phenomenal touches, they controlled the midfield, they had strong defenders. And when the middle is open, take it through the middle. They did exactly what they needed to do to get the outcome they wanted.”

Abbie Brumley started the scoring for the Eagles with a goal at the 2:30 mark of the first half. The Stars settled in for the next 33 minutes, refusing to allow a goal until Geer broke free at the 35-minute mark. Two minutes later, Grace Wickersham gave the Eagles a 3-0 lead for the intermission.

In the second half, Geer struck quickly at 37:47, and Brumley ripped a shot that BNL goalie Crystal Webb deflected but couldn’t keep from crossing the goal line at 34:36. Brumley completed her hat trick with a 20-yard blast from the left wing at 32:03.

Wickersham won a race to a through ball for a goal at 24:23, Geer dribbled through defensive traffic for a point-blank goal at 23:22, and she capped the onslaught (triggering the mercy rule for 9-goal difference) with a long shot at 20:27.

The Stars (0-3-1) will entertain Columbus East on Tuesday.