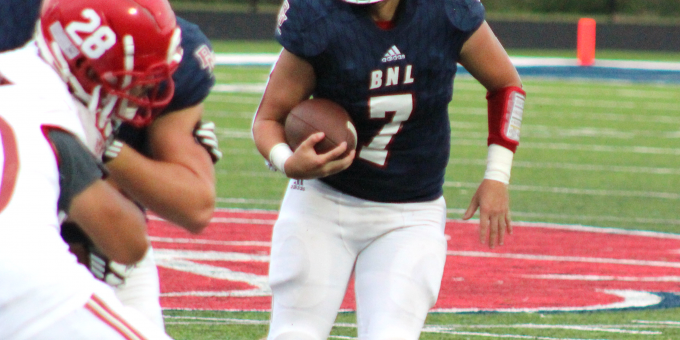 BEDFORD – The echoes of the moment, the memories of a perfect night. From the pregame dedication ceremony to the postgame swarm of students mobbing their team in the end zone, everything was brilliant and beautiful as Bedford North Lawrence celebrated a new beginning with a breathtaking victory.

After cutting the ribbon to christen the new turf field in the official home opener, the Stars cut down Jeffersonville, roaring to a 48-13 triumph on a blissful Friday night. Zane Anderson scored four touchdowns as BNL dismantled the Red Devils and celebrated the first career win of new head coach Derrick Barker with the obligatory water-cooler bath.

That splash never felt so good. BNL (1-2) ended a brutal eight-game home losing skid, winning in Stars Stadium for the first time since conquering Jennings County in 2019, and exorcized some demons by dunking the Devils (1-1) in the Hoosier Hills Conference opener.

Heroes were plentiful. Anderson did a lot of the dirty work in the red zone, Memphis Louden threw a touchdown pass and scored once, Piaire Childs ripped off a 53-yard touchdown run, Brye Lewis made a remarkable catch and raced 79 yards for another score. But while the offensive fireworks were amazing, the real heavy lifting was done by a defensive unit that answered a manhood challenge by shutting down a potent Jeffersonville running attack.

Last week, the Devils had two backs over 100 yards. This week, BNL didn’t allow the Devils to reach the century mark as a team. After giving up 100 points the first two weeks, those Stars showed some toughness and grit. So in essence, this was a complete and decisive, total victory. And for the first time, the running clock in the second half was to hasten BNL’s dominance and Jeffersonville’s humble demise.

“It’s all about those kids,” Barker said, deflecting credit. “They get to experience winning. I’m proud of them, they played great. All the credit goes to them.”

Where to start? Well, let’s start with the first series. Jeffersonville quarterback Cole Phillips connected with talented receiver Davarhy Julian for 43 yards as the Devils raced into the red zone. That drive stalled, and on fourth down the 32-yard field goal by Hannah Magruder was swatted down. However, the ball didn’t advance beyond the line of scrimmage, and Jeff’s Devonta Bailey was astute enough to recover the ball and continue the play as the Stars ran off the field. Bailey scored for a bizarre 7-0 lead.

Rather than crumble, the Stars clinched fists and started pummeling. Louden hit Ryker Hughes with two passes, and the sophomore quarterback scurried home from 14 yards. On the next Jeff play, BNL’s Jesse Brock stepped in front of a Phillips pass and raced 52 yards to the goal line with the interception. Anderson scored on the next play, and in 23 seconds BNL had a 14-7 advantage.

“It’s more of that mental toughness,” Barker said. “They just respond. They reset themselves and go from there.”

The Devils came back with a 32-yard touchdown from Phillips to Julian, who was proving to be unguardable in the secondary. But momentum shifted in the second quarter when Dylan Nikirk took a punt return 47 yards to the 8 yard line. Anderson scored on the next play for a 21-13 lead. The Stars followed with a successful onside kick, recovered by Collin Whitaker, and Hughes made a fantastic juggling catch on the deep left sideline for 39 yards. Two plays later, Anderson bulled over from the 2 for a 28-13 advantage.

“Man, he was running hard,” Barker said of his senior running back. “The offensive line opened holes. He might not look like an big bruiser, but he runs. He’s hard to stop.”

BNL was unstoppable in the second half. Three drives, three scores in less than 7 1/2 minutes.

Boom, Childs made a slashing cut through the line and found daylight for a 53-yard TD. Bang, Lewis made a stretching snag and zoomed to the end zone from 79 yards. Whack, the Stars swarmed Jeff punter Yuri Abrao when he fumbled a snap, and three plays later Anderson rumbled over from 7 yards. The rest was the countdown as the clock rapidly clicked away.

Anderson finished with 72 rushing yards while Childs totaled 75. Louden was 7 of 13 for 195 yards, with Hughes catching 3 for 61 yards.

“It feels amazing,” Anderson said. “It showed what our offense can do. The offensive line did an amazing job.”

“We’ve got weapons,” Barker said. “We’ve played Brye at every position in the offense. It’s just more weapons in the arsenal, and we just have to keep adding to it.”

Applause for the defense. Jeff’s powerful Zion Mansfield and speedster Jered Tyson had run over Seymour in last week’s clash, but they were stifled. Mansfield was limited to 56 yards (with half of those after the running clock was triggered) and Tyson totaled 56. Phillips connected with Julian five times for 143 yards, but the Stars picked off two (with Lewis grabbing one late in the first half). They also swatted down three passes.

“They showed up,” Barker said. “I challenged them before the game. I told them it would come down to tackling, come down to being physical. They really answered the bell.”

“We came out and punched them in the mouth,” senior linebacker Ryan Perry said. “I feel like we did pretty good.”

The pregame dedication ceremony included city and school officials, plus former BNL players and coaches. With all the hype, with all the emotion of the event, BNL was sensational.

“We’re extremely pumped,” senior Grant Todd said. “This has been a long time coming. We’ve been wanting to prove why we got this field, why we’ve been working so hard. This was our statement. We wanted to do this for us, for the community, show why we deserve these things. I think we proved it pretty well.”

While BNL was making its statement, Seymour made another, ending Columbus East’s incredible 96-game conference winning streak with a 28-24 victory. That was opened the door for a new league winner for the first time in over a decade.

The Stars can take a step in that direction next week when they host New Albany.