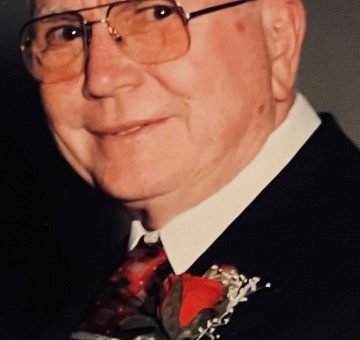 Born February 18, 1931, he was the son of Norman Burlin and Della Lucille (Johnson) Goodman. He married Georgia Marie Hoskins on December 30, 1947. He was a millwright for Burch and Lamb Construction for 45 years and a
veteran of the U.S. Army serving during the Korean War.

He was a member of the Mt. Pleasant Christian Church, Masonic Lodge #14 F & AM, Scottish Rite Valley of
Indianapolis, Gillen Post #33 American Legion, Shriner, and Millwright Local #1080 of Greenwood, IN.

He was preceded in death by his parents, a brother, Jimmy Dean Goodman; a grandson, Robert Dale Hicks.

A masonic service will be conducted at 1:00 p.m. and funeral services will immediately follow on Tuesday, September 7th in the Elmwood Chapel of the Day & Carter Mortuary with Pastor Jeff Hudelson and Jo Ratkovich officiating. Burial will follow in Green Hill Cemetery where military rites will be accorded by members of Gillen Post 33 American Legion. Visitation will be from 11:00 a.m. until the hour of service on Tuesday at the Day & Carter Mortuary.