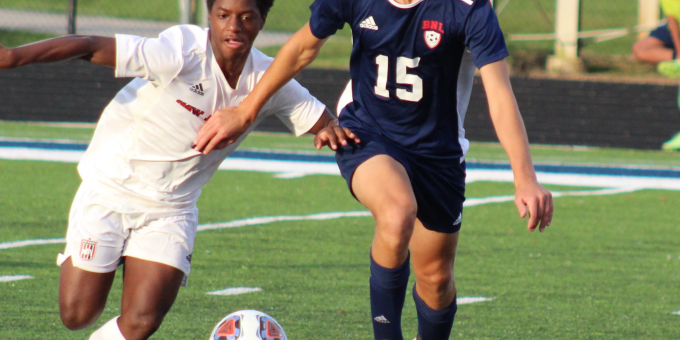 BEDFORD – On a perfect playing surface, New Albany had the perfect game. Accentuate speed, spread the defense, attack the goal.

The Bulldogs, accustomed to playing on turf on their home field, scored three second-half goals to pull away from Bedford North Lawrence 5-1 on Thursday night, marring the christening of BNL’s new turf field in Stars Stadium.

Finn Railey and Gus Dickman both scored twice for the Bulldogs, who remained unbeaten (4-0-1) and won the Hoosier Hills Conference opener. The Stars (3-2-1, 0-1-0 in the league) couldn’t crack New Albany goalie Quincy Rainey until the final minute.

“We had opportunities, and we couldn’t take advantage,” BNL coach Logan Jackson said. “Our touch was off and maybe that was the turf, maybe we haven’t been over here enough to practice. They had a lot of things go their way, and we just couldn’t buy one. We squandered some things, and it snowballed. We just have to finish.”

The Bulldogs struck quickly with a goal by Railey at 37:07 of the first half. Both teams were quiet for the next 30 minutes, until Ryne Blair poked home a rebound at 7:20 as BNL goalie Tanner Robbins went airborne to grab a shot.

“That quick goal might have lulled us to sleep a little bit,” New Albany coach Josh Dickman said. “We didn’t play very well in the first half. We had trouble finding guys, difficulty finding space. Once we were able to move the ball out wide, spread them a little, things opened up.

“We like to move the ball around, keep possession and knock it around some.”

New Albany adjusted for its second-half scores. Dickman got his first goal at 36:12, and Railey rang the ball again at 24:45. Dickman capped New Albany’s surge with a goal at 3:51. Robbins made a spectacular stop late in the second half, making a one-handed stab save to deflect the ball off the cross bar and covering up before colliding with a New Albany attacker in the box.

BNL, who was missing top threat Josh Anderson (out with a broken right hand suffered against Bloomington North), finally got on the board with 1:04 left as Clayton Burgess tallied on a sharp one-touch shot via a Karter West pass.

The Stars will host Evansville Christian (on the turf field once again) in the second half of a girls-boys doubleheader on Saturday.