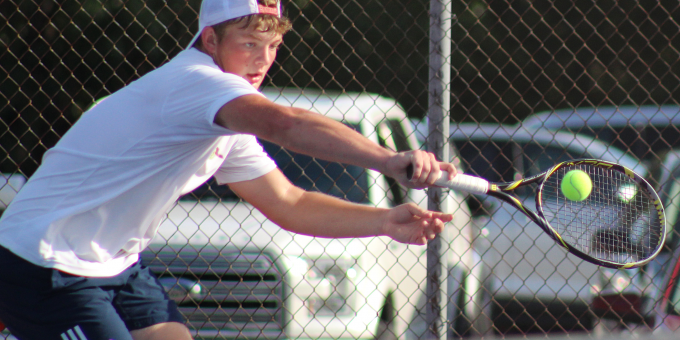 BEDFORD – Seymour made all the noise on the court, both in terms of vocal encouragement and the scorebook.

Seymour’s Hunter Heckman fought off Steven Graham in a shortened third-set tiebreak at No.1 singles, and the Owls took advantage of fast starts on the other four courts.

“Seymour has a solid lineup top to bottom, and they are having a nice season,” BNL coach Chris Kurtz said. “They brought the energy tonight, and we just weren’t able to match it. We got off to a slow start on several courts, and just couldn’t turn it around in most cases.”

“Steven was a bright spot,” Kurtz said. “He didn’t come out with the win in that third set tiebreaker, but I really liked the way he competed throughout the match. He was never tight or tentative, and it was a good one for him.”

In doubles, Eli Meyer and Jack Vondielingen edged BNL’s Cameron Gratzer and Jayden Kemp 6-1, 7-6 (7-3 in the tiebreaker) at No.1, while Seymour’s Parker Thompson and Reuben Kruse handed BNL’s Nate Pemberton and Caleb Jones their first setback as a tandem with a 6-4, 6-0 win at No.2.

“Our No.1 doubles was another spot that took a bit to get going, but the takeaway here was how they responded when down 4-1 in the second set,” Kurtz said. “They fought back to take a 5-4 lead before eventually falling in the tiebreaker. Earlier in the season I don’t think they would have been able to do that, but these guys really are growing as players and this is a great example of that.”

The Stars will host Brownstown on Sept. 9.