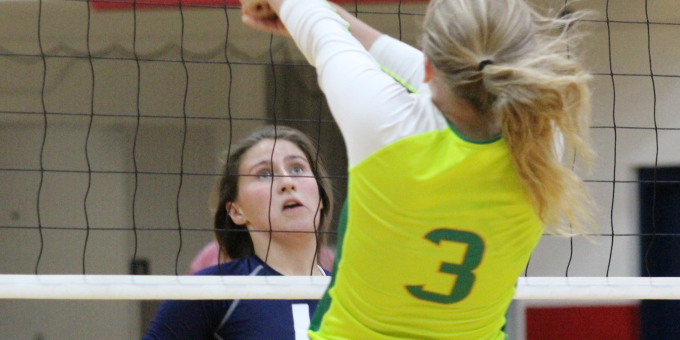 BEDFORD – Welcome back. After 10 days on the sideline, after missing seven matches during the mandated virus quarantine, Bedford North Lawrence returned to action on the court. Restart with an ease-into-it, easy-win opponent? Oh no. Exactly the opposite.

The Stars, missing key pieces with four players still fighting through the illness, cobbled together a lineup after one day of practice and returned to collide with perennial Hoosier Hills Conference power Floyd Central. That’s a formidable task, even when healthy.

After playing even during the early stages of the opening set, the Highlanders blasted away to a three-set sweep on Thursday night. Natalie Lostutter knocked down 12 kills as Floyd flogged its way to a 25-11, 25-11, 25-13 triumph.

BNL (1-4) just didn’t have enough firepower. The Stars scrapped their way to an 8-8 deadlock in the first set before Floyd’s talent and athletic advantage took over. Veteran Floyd coach Bart Powell called this team “the most talented I’ve ever had” and that’s a mouthful. The Highlanders have had as many as six Div. I recruits on their roster in the past.

“We have our moments,” Powell said. “We’re still trying to figure things out. We have to become mentally tougher than we are right now.”

Given the circumstances and the opposition, BNL coach Gabrielle Arthur was not displeased. Like the old Welcome Back, Kotter theme song, “the names have all changed since you hung around. But those dreams have remained. And they’ve turned around.” She barely had time to scribble down a new lineup before practice on Wednesday.

“It really stinks,” she said. “Those matches we missed were momentum-building matches, the ones we start to get feeling comfortable before we see all the good teams. But it is what it is. The girls know it’s time to buckle down. I think we have a group that always gives 100 percent.

“You can’t be too disappointed, coming off of 10 days. That’s the most fundamental team we’ll play in the whole conference. I didn’t think we played as badly as we could have, Our effort was there. The defense got to what we could, and the block did well considering we have four players still in quarantine.”

“When we communicate, our team is a trillion times better,” Arthur said. “That energy, when they’re talking to each other, makes us play so much better.”

Kylie Minnis had 9 kills and Kaylee Hunt totaled 8 for Floyd (6-2), while Caroline Hilbrich had 3 aces and Mandy Hess dished out 24 assists.