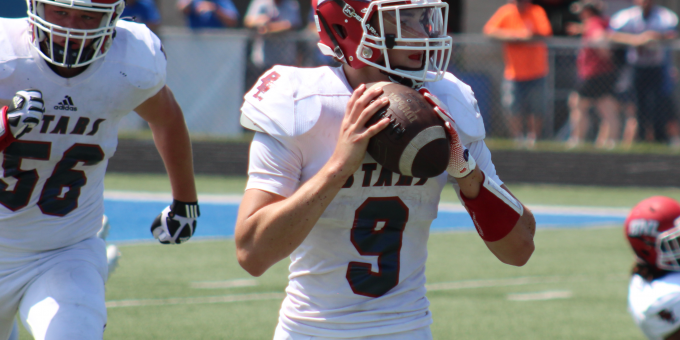 The Stars will officially christen the new turf field prior to their home opener on Friday. The party will start with pregame tailgating festivities, followed by a dedication ceremony featuring former players, coaches and school officials, then culminate with a Hoosier Hills Conference clash, against an opponent certainly capable of spoiling everything.

Jeffersonville, the defending sectional champion, will look to crash the celebration. The Devils (1-0 after a 47-36 win over Seymour last week) have already celebrated a greater victory, having survived a two-week shutdown, missing the preseason scrimmage plus the Week 1 opener. The Stars (0-2) better have the bouncers ready.

And the defense, which has already surrendered 100 points, better accept the invitation to make a prolonged appearance. If not, the Devils could run them into the ground.

Jeffersonville – even with half the roster still sidelined before they finished the required number of practice sessions to be eligible – stomped all over Seymour with a thunder-and-lightning backfield attack. Zion Mansfield, the bigger and louder half of the equation, rumbled for 128 yards and three touchdowns, while Jered Tyson added 130 yards and two scores. The Devils rambled to a 34-0 lead in the first half.

“We’re very pleased with our backs,” Jeffersonville coach Isaac Parker said. “We have a big bruiser back there who runs hard, runs downhill and has speed for his size. Tyson is a senior who has waited his turn and has really matured.

“The shutdown was a huge setback. It was tough going in last week. We didn’t feel like we were in good physical condition, still don’t feel like we are. We managed the best we could, were blessed to get a lead right out of the gate, and we tried to milk it from there.”

BNL’s first two opponents were geared for the passing attack. This test will be the polar opposite, an examination of physicality, toughness and tackling. Miss one, and the Devils could be dancing in the end zone.

“We have to tackle better,” BNL coach Derrick Barker said. “That’s the big thing. We’re in the right place most of the time, we have to get better at getting guys on the ground. That’s a big focus. They’re explosive, and we have to understand any missed assignment or tackle and they can take it 90 yards.

“They’re definitely a good running team. And I’m sure they have a lot of stuff they didn’t show in the bag. They showed the two running backs enough to know they’re very good, both as runners and blockers. They run hard. They’ll hang their hat on running the ball and being tough.”

That hat fit perfectly last season as the Devils stung the Stars 20-19. Jordan Ferguson ran for 190 yards, including an 81-yard TD, while Davarhy Julian returned a crucial fumble 85 yards for another score. That turnover, and a later one on the final drive, cost BNL dearly as the Stars wasted a 19-7 lead in that regular-season finale. And they had to keep that bitter taste in their mouths all winter when a virus outbreak forced BNL to withdraw from the sectional.

Meanwhile, the Devils (1-5 at one point last year) used that comeback win as a catalyst to two surprising postseason victories and a sectional title before falling to Castle in the regional.

“I like the new style, running everything out of the gun,” Parker said after scouting BNL. “They executed well. They’ll cause problems. They’ve played two solid teams. We’re still trying to work on timing, things that we should be 25-30 practices in now. We’re short on that.

“We know we have to come with a solid game plan. Bedford is always coached up, they’re always a solid and physical team. They had a nice offensive output against North. We know we’ll have our hands full.”

BNL’s issue, in addition to the defensive struggles, has been slow starts, even in the preseason scrimmage against Mitchell. They been down two-plus touchdowns, with a first-play fumbled snap aiding their own demise against Martinsville and a kickoff return TD to open against North, in a short time span in both games.

“We need a faster start,” Barker said. “We can’t get behind against them. It has to start from the jump. We have to get better at playing four full quarters. We’ve had some moments we’ve looked good, last week it was the first time to put it together for an extended period. Now we have to do it for four quarters.

“It’s a good test to see where we are. It’s the first conference game, so it means a little more.”

Last meeting: Last year at BNL, the Red Devils rallied from a 19-7 deficit to edge the Stars 20-19. Jordan Ferguson ran for 190 yards, including an 81-yard touchdown, and Davarhy Julian returned a fumble 85 yards for a score for the Devils. Zane Anderson ran for 86 yards and a TD for BNL.

Game notes: Last year’s game with the Devils was BNL final outing of the 2020 season. Positive virus cases forced the team to withdraw from the sectional two weeks later. BNL will officially dedicate the new turf field. WQRK will provide pre-game entertainment and festivities, and the public is welcome to attend.