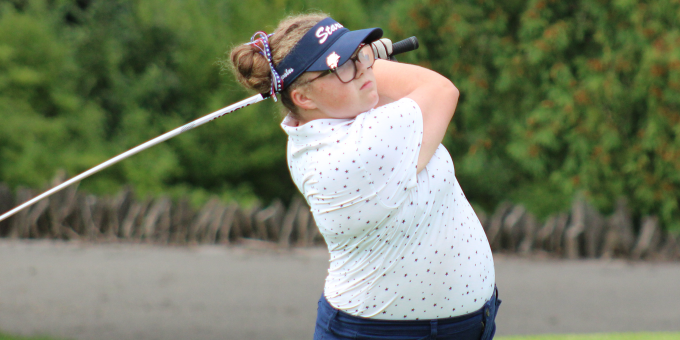 BEDFORD – Golf is like a battery, with a positive and negative post. More charge comes from the positive.

Bedford North Lawrence’s Daphney Sproles, once known as “Negative Nancy” among her teammates, has flipped the switch. She’s now a positive pearl, and Sproles celebrated Senior Night at Otis Park with a round that reflects how much mental attitude directly sparks the scorecard.

Back to full strength after juggling the lineup because of virus quarantines, the Stars carded a 185-202 victory over Seymour on the front nine on Tuesday afternoon. Kenley Craig and Chloe McFaddin paced BNL with 45s while Sproles fired 46 with a birdie on the par-5 sixth hole and three other pars.

For the lone senior on the roster, that a far cry from the 67 she recalled shooting as a sophomore. “It’s crazy,” Sproles said. Her only bad shot was a tee shot over the stone wall boundary on the infamous 8th hole – “the first time I’ve done that in four years,” she lamented. Two years ago, that might have caused a meltdown. Not now.

“Her mental attitude has improved night and day,” Johnston said. “That’s a big aspect in the game going forward. She’s done a lot for our team. She has done a great job helping the younger girls.”

McFaddin (two pars) and Craig (two pars) were steadier with no major slips, and Ellie Horton capped her 49 with a ticklish sliding par putt on the ninth green.

“We’re finally back to full strength,” Johnston said. “I’m excited to see what we can do now. I never want anyone to have to sit out, but it was kind of a blessing that some of them other girls stepped in and got that experience.”

Now that her flock is intact once again, Johnston can resume the patient teaching of her young squad.

“I have found that what I try to teach them is hindsight,” Johnston said, sounding like every parent at some time or another. “I know what I used to do. And I want them to be better than me.”

Lainey Jackson posted a 46 for the Owls.

BNL will host Jasper on Sept. 7.