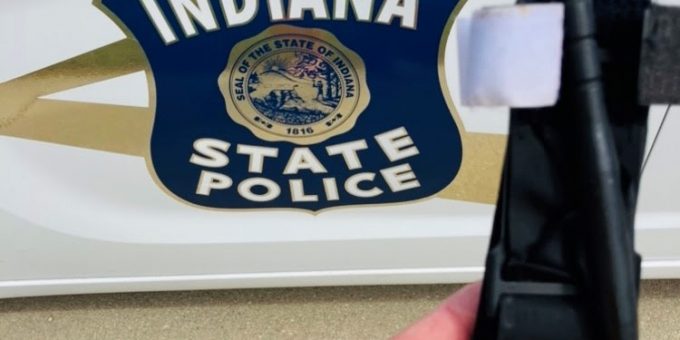 CLAY CO. – On Sunday, at approximately 7:30 a.m., troopers from the Indiana State Police responded to a single-vehicle crash on Interstate 70 near the 27-mile marker westbound.

The preliminary crash investigation, by an ISP master trooper, revealed that 46-year-old Jon D. Bachelor, of Brazil, was driving a 2004 Ford SUV on Interstate 70 west near the 27-mile marker. For an unknown reason, Bachelor lost control of his vehicle and overcorrected, causing his vehicle to leave the Interstate and travel into the median. The vehicle rolled several times before coming to rest on its passenger side, against the median guide wire of Interstate 70.   While the dust from the accident was still settling, ISP Sergeant Brent Robinson arrived on the scene.  He and several good samaritans pushed Bachelor’s vehicle off the guidewire.

Prior to the arrival of medical personnel, Sergeant Robinson quickly grabbed his medical gear and assessed the situation.  Sergeant Robinson noticed severe damage to one of Bachelor’s arms which was causing heavy bleeding.  In order to get to the injury, Sergeant Robinson cut away the seat belt holding Bachelor in place, and quickly applied a tourniquet to his bleeding arm, stopping the blood loss.

This immediate action of Sergeant Robinson possibly saved Bachelor’s life.  Bachelor was flown via a medical helicopter to a hospital in Indianapolis.

“It was good that the driver was wearing his seat belt,” said Sergeant Robinson stated. ” It kept him secured in his seat which prevented him from being ejected from the vehicle. The situation could have been so much worse.”