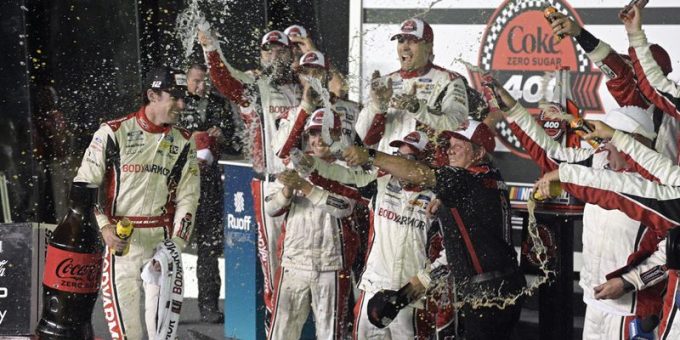 Ryan Blaney won the Coke Zero Sugar 400 to score his seventh career NASCAR Cup Series victory, his third of the season, and his first at Daytona. His margin over second-place Chris Buescher was .773 of a second.

There were eight caution periods for a total of 31 laps. Only 16 of the 40 drivers in the Coke Zero Sugar 400 finished on the lead lap.

At the start of the race, Briscoe radioed that he felt the Mobil 1 Ford Mustang was bottoming out, and he slipped outside the top-20. Briscoe was back inside the top-10 and scored eighth by the lap-20 competition caution. He pitted during the caution for fuel only, telling the team his handling was great. No adjustments were made, and he restarted ninth on lap 26.

As the race returned to green, Briscoe made the decision to move to the second pack of cars with his Stewart-Haas Racing teammates Aric Almirola and Kevin Harvick to avoid the “dicey racing” happening in the front pack.

He was as far back as 27th on lap 30 but made his way up to 22nd by the end of the first stage. Briscoe pitted the Mobil 1 Ford for four tires, fuel, and chassis adjustments at the break and restarted 22nd for the second stage.

The second line of cars began to develop in the bottom lane, shuffling Briscoe back to the 14th position when the caution flag waved on lap 78. Briscoe lined up 13th for the lap-82 restart and remained in the top-15 until lap 91 when he was scored 21st. He maintained that position until the conclusion of the second stage on lap 100.

The Mobil 1 driver ran as high as seventh before pulling out of line to go to the back of the pack on lap 122.

On lap 123, the Ford drivers made a scheduled green-flag pit stop for fuel only. When the No. 2 car lost the pack, Briscoe fell back to become his drafting partner and was scored in 35th once back up to speed. When the yellow flag came out on lap 141, Briscoe was able to take the wave-around and rejoin the lead lap. He restarted 30th on lap 145.

On lap 147, Briscoe was nearly clear of a multicar wreck, but a car came back down the track and made contact with his No. 14 Ford Mustang, causing heavy damage. The team made two stops for repairs and restarted 27th on lap 151.

Briscoe made it through the next caution period on lap 158 and lined up 14th for the first overtime attempt. As the field approached the checkered flag, Briscoe was running just outside the top-10 but was collected in the final multicar accident. He was unable to complete the final lap and was scored 21st, one lap down.

The next event on the NASCAR Cup Series schedule is the Cook Out Southern 500 on Sunday, Sept. 5 at Darlington (S.C.) Raceway. The first race in the 10-race NASCAR Playoffs starts at 6 p.m. EDT with live coverage provided by NBCSN and SiriusXM NASCAR Radio.