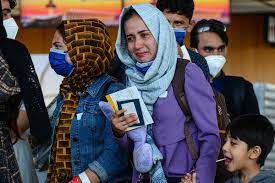 INDIANA – On Friday, Indiana officials began to address a recent rumor that the state could host perhaps thousands of Afghan refugees at Camp Atterbury, a training facility in South-Central Indiana.

While neither denying nor confirming the possibility, Jeff Lowry, a master sergeant at the public affairs office of the Indiana National Guard, said in a statement to The Statehouse File that the U.S. will continue to adapt facilities to help and support Afghan families and individuals.

“The Secretary of Defense has authorized Fort Lee, Virginia; Fort McCoy, Wisconsin; Fort Bliss, Texas; and Joint Base McGuire-Dix-Lakehurst, New Jersey, to provide temporary housing and support for up to 50,000 at-risk Afghans,” he said.

“Additionally, the Defense Department, through U.S. Northern Command, has agreed to provide to the Department of State transportation and temporary housing, sustainment, and support inside the United States for Afghan special immigrant visa applicants, their families, and other at-risk individuals at suitable facilities, in permanent or temporary structures, as quickly as possible.”

He continued, “Support will be provided on DOD installations and through the use of assisted acquisition for the use of non-DOD land and facilities. Military departments are continuing to identify potential bases to meet the potential expanded needs, and we will notify you accordingly if Camp Atterbury in Indiana is approved to support the Afghan evacuee mission.”

While there have been scattered reports of individual families seeking help in Indiana, Gov. Eric Holcomb said in a statement that the state is waiting for instructions on whether a larger group of refugees will come to the state.

“Indiana is a willing partner to help Afghan refugees who have put their lives on the line in support of the United States for the past 20 years. We owe this to them, and there’s no better way to help than to offer aid to those who aided and protected us,” Holcomb said.

“As of now, I have not received outreach from the federal government about its intentions for Camp Atterbury. There is the information we want to know, such as how many refugees will be sent, what their immigration status is, what extra security measures will the DOD provide, what our expectations of state and local resources to assist with the operation. I trust the federal government will address these questions and others we have before any operate commences.”

Thousands of people have fled Afghanistan since Aug. 15, after the Taliban, a religious-political movement and military organization, took over the country.

On Friday, Pres. Joe Biden, alongside Gov. Holcomb, commanded flags to be hung at half staff to honor the 13 U.S. military members killed in a terrorist attack Thursday at the Kabul airport.