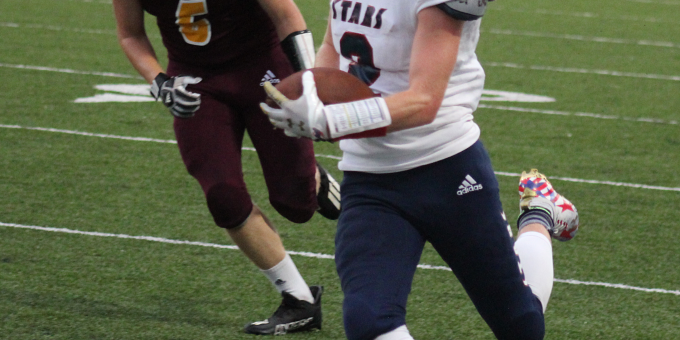 BLOOMINGTON – On a wild and crazy night, with more pregame suspense than a who-dun-it mystery, Bedford North Lawrence teetered on the edge of a blowout, then almost came all the way back from the dead to scare the life out of Bloomington North.

What wasn’t a mystery? Reece Lozano was the best player on the turf. North’s electric playmaker was unstoppable, a runaway train with the football in his possession, as the Cougars won a thrilling shootout with the Stars, who came of age during a gutsy second half.

Lozano, one of those hold-your-breath athletes when he takes off, ran for two touchdowns and accounted for 305 total yards while powering the No.16 Cougars to a 55-34 triumph on Friday night. Running back Cody Mikulich scored four touchdowns as North conquered BNL for the 13th time in the last 14 meetings.

BNL (0-2) did not go quietly, even after giving up scores on 6 of North’s first 7 drives. Even after falling behind by 28 points, when another North touchdown would have triggered the mercy rule and running clock in the second half. No sir, the Stars proved something. Like John Wayne, there is true grit on that sideline.

With an offense that found its footing without kicking the ball all over the field, the Stars were dangerous. They battled back within 48-34 early in the fourth quarter, and another momentum change – a turnover, a big play, anything – would have made the Cougars squirm a lot. Not until North’s final thrust, and the last Mikulich touchdown with 2:22 left, did enough dirt finally got thrown on BNL to keep it buried.

“We at least put a scare in them in the second half,” BNL coach Derrick Barker said. “It was awesome to see. I’m proud of our kids. We were on the verge of a running clock for a while, and it would have been easy for them to lay down and say ‘Let’s get out of here.’

“They sure didn’t. It was an unbelievable effort. I hate to say moral victory, but I think we showed what kind of team we can be in the second half.”

North (2-0) showed its devastating potential in the first half. Mikulich returned the opening kickoff for a touchdown, and Lozano went to work after that, directing runaway-train drives for 41 first-half points. North scored three times in the final 3:05 of the second quarter and was racing away to a full-throttle win.

Lozano hit Josh Hanna for 43 yards, setting up the second Mikulich score for a 13-0 lead. He scrambled 32 yards for the third TD, hit Hanna from 21 yards to cap a 17-play march for a 27-6 lead, zipped a 55-yarder to Jarno Hicks to precede another Mikulich TD, and capped the last drive of the half with a two quick aerial strikes and his own 2-yard score with 25 seconds left.

That was a lot of shock and awe in a short time span.

“That stretch was huge,” North coach Scott Bless said. “That was a combination of offense, defense and situational awareness. I felt a little like (former Florida and South Carolina coach) Steve Spurrier. I don’t care, just give us the ball.

“Our quarterback, if there’s a better one in the state, I’d sure like to see him. His field awareness, and his awareness of where the football needs to go, his ability to put it there, are just great. I’m glad he’s on our team. I say that often.”

BNL showed its own big-play ability with Dylan Nikirk’s 63-yard dash with an option pitch for the first BNL score, and sophomore quarterback Memphis Louden hit Ryker Hughes for a 68-yard bomb. If BNL had converted two other chances with first-and-goal opportunities in that first half, the second might have played out quite nervously and differently.

Despite those issues, the Stars kept the clock on real time with a second-half time warp, back to solid football. Louden found Nikirk twice for huge pass plays, and Piaire Childs crashed behind a Brye Lewis block for a 12-yard score to start the third quarter. After North missed two field goals, including one that bounced off the cross bar, the Stars blasted back with touchdowns from Hughes (a gorgeous 77-yard bomb from Louden) and Childs (from 4 yards out) as BNL scratched within 48-34. But after forcing a North punt, the Stars were out of oxygen, failing to convert on fourth down from the 39. Four plays later, Mikulich ended the suspense.

Lozano was 14 of 19 passing for 211 yards and he ran for 94 while totaling three touchdowns. Mikulich rumbled for 124 rushing yards.

BNL, after all the fumbles and turnovers in Week 1, was a different team, certainly a more dynamic one. Louden was 11 of 17 for 279 yards, while Nikirk totaled 89 rushing yards and 88 receiving yards. Hughes caught his pair for 145 yards.

“It was good to see,” Barker said. “We knew that’s what Ryker was a capable of. When the shot comes up, you can’t miss. And he made the plays.”

“Their game last week was not them,” Bless said. “We knew that. We knew they could move the ball. That second half seemed really long. We took our foot off the gas in some way, shape or form.”

The game started 40 minutes late following a storm delay and a bizarre circumstance for an alleged active shooter situation on the North campus. That was later determined to be a false alarm, blamed on noise during testing of the public address system at the football field.

BNL will return home to host Jeffersonville in the official home opener of its new turf field next week.