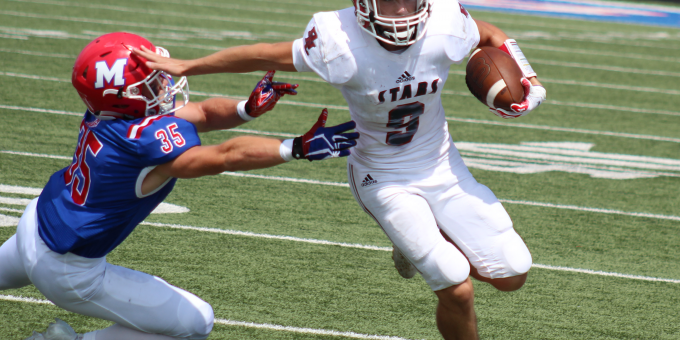 BEDFORD – In order to become the best, the best must be vanquished. That level of conquest demands the best, in terms of performance and maximum effort. Bedford North Lawrence will be tested by the best on its regular-season schedule on Friday night.

The Stars, knocked down by the first-week loss at Martinsville, will look to regain their footing when they visit high-powered Bloomington North, ranked No.16 in the Class 5A poll. BNL was standing on shaky ground in the opener, and there’s no helping the fact North is the most talented opponent – at least on the offensive side – the Stars will face.

If they’re lookin’ for trouble, North is all the trouble they’ll need. With one of the state’s top quarterbacks, with a top-tier receiving target and an overlooked running back, the Cougars have talent at every key position.

Senior quarterback Reece Lozano, already receiving offers from FCS programs, headlines a dynamic attack. He completed 11 of 14 passes for 187 yards in limited duty last week as North smoked Greenwood 48-8 (playing with a running clock in the second half), and he totaled 4 touchdown passes plus a rushing score of his own.

Lozano threw for 251 yards and two TDs last year against BNL, leading North to a 48-0 triumph. Tight end Aaron Steinfeldt, now at Indiana University, was his main target, and his younger brother Aidan (6-foot-4, 217 pounds) has stepped into that void. He might be the better player in the family, which is saying a lot. North coach Scott Bless has been blessed with weapons.

“Reece is bigger, stronger and faster than last year,” Bless said. “His biggest improvement is in making quick reads and making the throw quickly. His decision making in our run game makes us very difficult to defend. It is obviously tough to replace a Div. I athlete, and we had to replace two at the receiver spots.”

No problem. The younger Steinfeldt caught 4 passes for 95 yards and a score last week, while Jarno Hicks grabbed 4 passes for 73 yards and another TD. Add in rough-running Cody Mikulich (two TDs last season against the Stars), and it’s easy to see why North’s offense is feared. Where does the game plan start?

“It has to start with getting pressure on the quarterback without having to blitz,” Barker said. “If we can get some heat on him, it will help our coverage guys out. We need to be physical with the receivers, not let them get separation. Steinfeldt is every bit as good, and might even be better, than the older one. And I really like their running back. He’s a tough runner.

“We’ll have to play well. We can play with them, but we can’t make the same mistakes we made last week, especially early, or it will get ugly quick.”

The Stars have a lot of room for rapid improvement. They were guilty of five turnovers, including a locust swarm of fumbles, during the 45-14 setback at Martinsville. Part of that could be attributed to first-game nerves, the rest could be fixed with a focus on fundamentals. Protect the ball.

“More attention to detail,” Barker said. “A lot of it was not watching the snap all the way in, or having the snap too high, not taking risks that aren’t needed. We tried to force the ball into some windows (with three interceptions), more of a risk than we needed to take. We need to take what the defense gives us.

“Take care of the ball. We need to get out to a fast start. We need to have success early. They’re so dangerous, you can’t turn it over. You can’t make those mistakes against a top-10 caliber team.”

Bless, recalling a similar BNL start at Martinsville in 2018 before the Stars torched North 55-38 the next week, was ready to write off BNL’s opening as an abnormality.

“BNL has quite a few tough, fast ball players who can play multiple positions,” Bless said. “With only one game film to go off of, it is difficult to predict where those guys might play this week. Their loss to Martinsville was one of those games where a couple of plays early put them in a hole. The game was not indicative of their potential.”

Despite the obvious struggles, Barker did point out bright moments in that darkness. The defense held the Artesians to a field goal after a first-play fumble gave Martinsville possession at the 6-yard line. BNL converted two fourth downs during an 18-play drive in the first quarter and had another scoring chance early in the second. Jesse Brock collected two interceptions.

“We have to finish those drives with points,” Barker said. “Getting the turnovers was big, but we kind of wore down at the end. Obviously there was more negative than positive.”

BNL will have to control the ball, keeping it away from the prolific North offense, with sophomore quarterback Memphis Louden (who ran for a score and threw for another against the Artesians), junior slot Dylan Nikirk, running back Zane Anderson, and all-purpose threat Brye Lewis. The key will be flicking the switch from tentative to tenacious.

“Do it 100 miles an hour,” Barker said. “We can fix the mental mistakes. We can’t fix tentativeness or playing slow.”

Last meeting: Last season at BNL, the Cougars cruised to a 48-0 victory. Reece Lozano threw for 251 yards and 2 touchdowns while IU recruit Aaron Steinfeldt had 3 catches for 95 yards and a TD. Brye Lewis had 130 rushing yards before missing the second half with a knee injury.