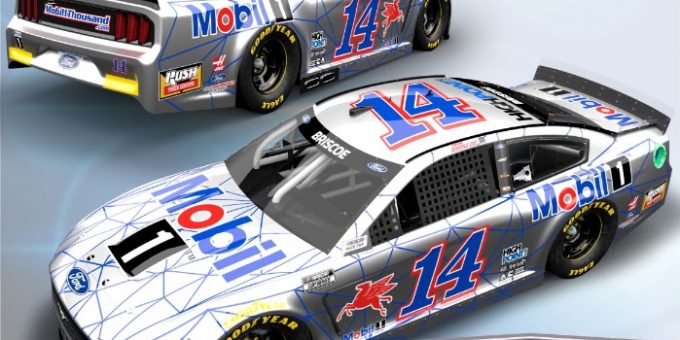 DAYTONA, FL – Chase Briscoe’s No. 14 Ford Mustang for Stewart-Haas Racing (SHR) will sport a new look this weekend with Mobil 1, the Official Motor Oil of NASCAR since 2003, serving as the primary partner at Daytona (Fla.) International Speedway for the first time this season.

Mobil 1 products are used throughout the racecar and they extend beyond just engine oil. Power steering fluid, transmission fluid, gear oil, and driveline lubricants from Mobil 1 give Briscoe and the team a technical advantage over their counterparts by reducing friction, heat, and rolling resistance.

The bold new livery features the Mobil 1 brand’s iconic Pegasus and Mobil1Thousand.com on the TV panel. Mobil 1 Thousand is a weekly contest guaranteeing that if Mobil 1 wins, fans win. Through the remainder of the season, one fan will win $1,000 or more if a NASCAR Cup Series driver who uses Mobil 1 scores the victory. The sweepstakes remain open through the NASCAR postseason, with even higher prize totals for the playoffs and special bonuses for cutoff races. Fans can sign up at Mobil1Thousand.com for a chance to win.

Saturday night’s Coke Zero Sugar 400 at Daytona marks the end of the regular season for the Cup Series drivers and Briscoe’s last chance to earn a spot in the 16-driver playoff field. Though his rookie season was slow to start, the No. 14 team has shown more speed and consistency over the last three races. Briscoe earned his third top-10 of the season at Watkins Glen (N.Y.) International before heading home to compete on the Indianapolis Motor Speedway road course. At Indy, he qualified on the front row, led a total of 12 laps, and was contending for the win before a last-lap run-in with leader Denny Hamlin left him one-lap down in 26th. In the Cup Series’ most recent outing at Michigan International Speedway in Brooklyn last Sunday, Briscoe struggled in the early stages of the race before advancing as high as fifth with five laps remaining. Kurt Busch’s car snapped loose in front of Briscoe, causing damage to the nose of the No. 14 Ford and costing Briscoe positions, but he held on for an 11th-place finish.

“I’ve really enjoyed the last couple of years running Daytona in the Xfinity Series,” Briscoe said. “There were only two Fords in the field and we had to work so hard to run well against everyone else when all the manufacturers and multicar teams work together. It was more rewarding to come out of those races with a good finish and you felt like you really did something when you were at a deficit in terms of numbers. It’ll be fun to do that and help the other Fords in the field and add to those numbers. Superspeedway racing is a completely different game. Running on Friday will just give me a chance to go in with nothing to lose and get a feel for that type of racing coming off of all the road-course races. Michigan gave us a little taste of it with the way the draft works there, but there’s nothing like Daytona, so the extra track time will be nice.”

Briscoe made his Cup Series debut in this year’s Daytona 500 and finished 19th after sustaining damage early in the race when the car in front of him had a tire go down and made contact with the No. 14. Outside of the Cup Series, Briscoe has made six starts at Daytona – four in the NASCAR Xfinity Series and one apiece in the NASCAR Camping World Truck Series and the ARCA Menards Series. His best finish is third, earned twice – August 2020 in the Xfinity Series and February 2017 in the Truck Series.

“I think staying out of trouble is what my strategy has always been at Daytona and that’s to stay aggressive all day long,” added Briscoe. “I don’t like to run in the back and wait it out. One conversation with Dale (Earnhardt) Jr. years ago really changed my thinking on how to race Daytona and Talladega. Every time I’ve followed his advice of just going for it from the start and staying aggressive, I’ve run well. You still have to stay out of trouble, but if you’re just hanging out in the back you don’t know what your balance is in the pack and what you need your car to do when you finally do get up there, so we’ll just try to get up front from the beginning and stay there.”

With 25 races complete in the Cup Series season, Briscoe is 22nd in the driver championship standings and leads the Rookie of the Year battle by 213 points over Anthony Alfredo.