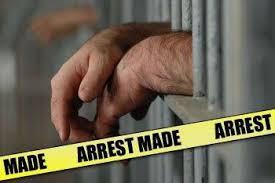 A deputy was dispatched to the 6000 block of East Washboard Road after receiving a report of a male who was trespassing on private property. The male had left prior to the deputy’s arrival.

Investigators were able to identify the male as 30-year-old Jarod Collenbaugh, of Dugger, after the property owner gave information about a previous encounter with him. After officers spoke with the victim, it was discovered that two catalytic converters had been cut from a vehicle that was parked next to a detached garage.

Investigators located Collenbaugh at his residence and conducted an interview.

After utilizing various investigative techniques on August 18, the ISP trooper suspected another theft had occurred in the area. He went to a second address in the 3000 block of East Gallimore Road. It was determined that a catalytic converter had also been cut from a vehicle outside of this residence. The homeowners did not yet know that they had been the victim of a crime.

As a result of the investigation, a probable cause affidavit was prepared and submitted to the Greene County Prosecutor’s Office for review. On August 20th an arrest warrant was issued for Collenbaugh.

Collenbaugh turned himself into the Greene County Sheriff’s Office on Saturday, August 21.

Indiana State Police Bloomington District A.C.E.S. Sergeant Greg Day commended the efforts of both ISP and the Greene County Sheriff’s Office for the teamwork involved in this case.

“When officers from multiple agencies can communicate, share information, and work together, quality investigations are the result,” Day said. “These officers did not stop at the initial call, and they were able to locate a second victim that otherwise could have gone unnoticed.”