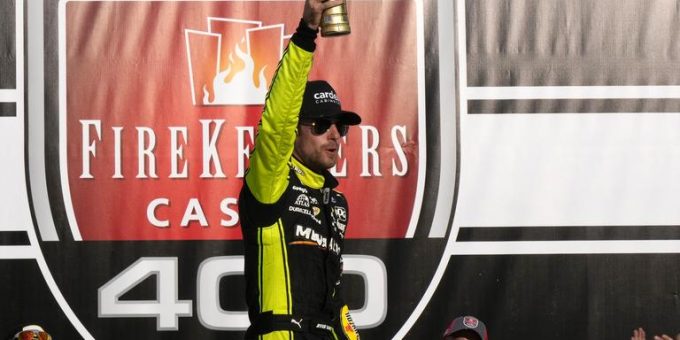 Ryan Blaney took the lead on a restart with eight laps to go, held off Kyle Larson, and went on to win Sunday’s race, his first in Michigan.

The victory was the Team Penske driver’s second of the season. His eight laps led were his only laps led.

He finished just a nose (.077 seconds) ahead of William Byron of Hendrick Motorsports, who finished second – the closest Cup Series finish in track history since the advent of electronic scoring in 1993.

Kyle Larson of Hendrick, looking for his sixth win of the season, had to settle for third place after leading a race-best 71 laps.

Hamlin, who appeared to be a threat to get his first victory of the season after leading 10 laps, was fifth in his Joe Gibbs Racing Toyota.

Briscoe earned his seventh top-15 of the season and it came in his 25th career NASCAR Cup Series start and his first at Michigan.

“We definitely didn’t start off how we wanted to,” Briscoe said. “The guys kept working on it and making it better, and I felt like at the end we got two really good restarts. I thought I was going to be looking really good for a top-five finish, but Kurt (Busch) got loose and I had nowhere to go. It caved the nose in, and obviously, we were struggling those last few laps. From where we started to where we finished it was great. I just thought for a second we would finish way better than 11th. We’ve made big gains in the last month and a half. It’s really encouraging, and we have one more week to try to make it in the playoffs at Daytona, where anything can happen. So we’ll go there and try to get in.”

Briscoe was the highest finishing NASCAR Cup Series rookie for the 21st time this season.

There were six caution periods for a total of 29 laps.

Twenty-six of the 37 drivers in the FireKeepers Casino 400 finished on the lead lap.

Kyle Larson remains the championship leader after Michigan with a 28-point advantage over second-place Denny Hamlin.

With Michigan over, just one race remains before the start of the 10-race, 16-driver Playoffs.

The next event on the NASCAR Cup Series schedule is the Coke Zero Sugar 400 on Saturday, Aug. 28 at Daytona (Fla.) International Speedway. The regular-season finale starts at 7 p.m. EDT with live coverage on NBC and SiriusXM NASCAR Radio.