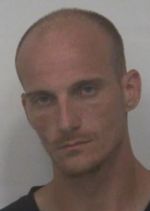 NORTH VERNON – A North Vernon man was arrested after police say he lit a victim on fire with a blow torch.

The Jennings County Sheriff’s Department is investigating an attack after a man was admitted to St. Vincent Jennings Hospital with severe burns on Tuesday at about 7:54 p.m.

The man told police, the man who injured him also robbed him during the attack.

Police arrested 27-year-old James Robbins of North Vernon after they served a search warrant at Robbins’ home in Country Squire Lakes. Deputies found items belonging to the victim along with meth, syringes, marijuana, and drug paraphernalia.

Robbins was arrested without incident on preliminary charges of robbery, battery with serious bodily injury, maintaining a common nuisance, and possession of a controlled substance and drug paraphernalia.