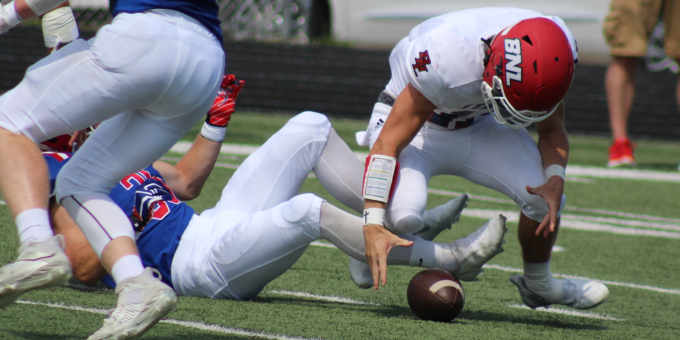 MARTINSVILLE – A day late, Bedford North Lawrence was more than a dollar short.

This game cannot be won by dribbling the ball. In the belated season debut, the Stars bounced it all over Siderewicz Field’s turf, treating the oblong treasure like discarded change in the sofa cushion. Opps, there it goes, gone for someone else to collect. Martinsville cashed in for an opening victory.

With a steady Adkins diet and an overdose of BNL turnovers, the Artesians cruised to a 45-14 triumph on Saturday afternoon. Martinsville quarterback Tyler Adkins threw for 218 yards and three touchdowns, while BNL’s slippery hands gave up seven fumbles, five turnovers and multiple dropped passes. Ball security, practiced and preached, was an obvious and fatal problem.

Martinsville, which missed five practice days last week – the reason for the 24-hour postponement – while hunkering down the entire team in virus quarantine, was not the team that looked out of sync. Even with all the self-inflicted issues, the Stars were in position to contend for their first road win over the Artesians in program history, down 10-7 late in the second quarter. But a last-minute Martinsville score in the first half and disastrous turnover to start the second smothered that chance.

“We talk all the time about ‘Stars can’t beat Stars,’” BNL first-year coach Derrick Barker said. “We can’t beat ourselves. That was really disappointing. We haven’t had those issues.”

BNL started with a high snap for a fumble on its first play, a dismal omen and a later trend. Martinsville scored 17 points off turnovers. The wounds were mostly from friendly fire.

“The start was horrendous,” said Barker, whose team was down 10-0 in less than four minutes. “I don’t think we could have started any worse. We were immediately out of our comfort zone.”

Despite the shaky getaway, BNL had its moments. Jesse Brock’s first interception, and a scampering return from midfield to the 6-yard line, set up the first BNL score, with Memphis Louden diving over from 2 yards with 2:12 left in the half. Get a stop, get the ball first to start the second half, the Stars were in decent shape for all the bleeding.

But that scenario didn’t play out. Martinsville returned a short kickoff to midfield, then scored in only 93 seconds. Adkins connected on four straight passes, including a 27-yarder to Luke Cheatham, and found Jayden Thacker from five yards out on a quick slant. Then when Martinsville’s Logan Poppy picked off a Brye Lewis pass down the right sideline and raced to the 9 on the first series of the second half, setting up Austen Frye’s TD blast, the Artesians were in command and BNL was in system shock. That made it 24-7 and the Stars were not going to recover.

“The game really switched on the drive before the end of the half,” Barker said. “If we could have gotten in the locker room at 10-7, we’re a different team. And I didn’t see the fire and intensity I saw on Friday night (in the scrimmage), and our conditioning was poor. For them to not have practiced for 10 days, they were in far better shape than us.”

Perhaps practice is overrated. The Artesians didn’t wilt, nor cramp, in the midday heat, scoring on three consecutive drives in the second half to pull away.

“It’s the Allen Iverson, right? We’re talking about practice?” Martinsville coach Brian Dugger joked. “I didn’t like it, I wanted to make sure we got all our reps, but we really sold this was a program game. This win wasn’t about this week of practice, this was about everything we’ve done in the winter, spring and summer. We’ve prepared ourselves for adversity like this.”

Adkins completed 21 of 34 for 218 yards and the three TDs. Brock intercepted him twice, but he bounced back with two scoring passes to Chase Mabry (who caught 10 passes and added a rushing TD in the fourth quarter). Frye finished with 104 rushing yards and two scores.

In addition to the variant case of acute fumblitis that was contagious among the Stars, Martinsville picked off three passes, with Poppy pocketing a pair. Louden, who now seems to be the main choice of BNL’s split-time quarterback plan, was 5 of 16 with two interceptions for 90 yards. The bulk of those came on a quick shot to Kole Bailey, who made a grab in a nest of bad-intention defenders, cut right against the grain and won the race down the right sideline for a 45-yard score, getting BNL within 31-14 with 1:53 left in the third quarter. That was the lone offensive highlight during a storm of mistakes. Three of BNL’s first four drives in the second half ended in turnovers.

“We emphasize ‘Get the ball, get the ball,’” Dugger said. “That’s what we want. We feel, if our offense has the ball, we have a chance to score. We want the ball in our hands.”

BNL will look to rebound on Friday at Bloomington North.