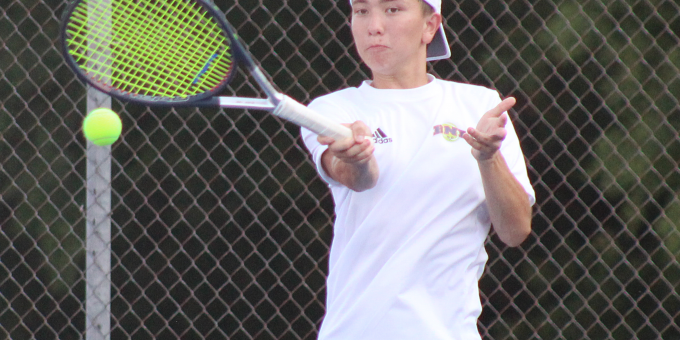 The Stars dropped a 4-1 decision to Bloomfield in the opening round, then fell to Madison 3-2 in the consolation round. Borden won the team title with victories over Madison (5-0) and Bloomfield (3-2).

BNL’s battle with the Cubs came down to No.1 singles, with Bryce Miller fighting off Carter Kimmel 7-6 (7-5 in the tiebreaker), 7-5 (with a late service break) to decide the outcome.

“When Carter walked off the court at the end of the final deciding match, his teammates welcomed him to the team meeting with cheers, and applause,” BNL coach Chris Kurtz said. “That’s the story of the night for me, the whole season really. They appreciated what they had just seen, and wanted to be sure he knew it.

“These guys have faced adversity all season long (with two singles starters missing from the lineup), each day seems to bring something, and today was no different. But they haven’t complained or made excuses, they just go play. I’m so proud of all these guys.”

The Stars swept the doubles as Cameron Gratzer and Jayden Kemp conquered Matthew Burkhardt and Brodie Harsin 6-0, 6-0 at No.1, while Caleb Jones and Nate Pemberton topped Abe Reitz and Landon True 6-3, 6-4 at No.2.

In the opening round, Bloomfield swept the singles without dropping a game en route to the victory. BNL’s lone win came at No.2 doubles with Pemberton and Jones combining for a 6-3, 6-3 triumph over Boone Holtsclaw and Kellen Luse.

The Stars (1-4) will host Columbus East on Monday.