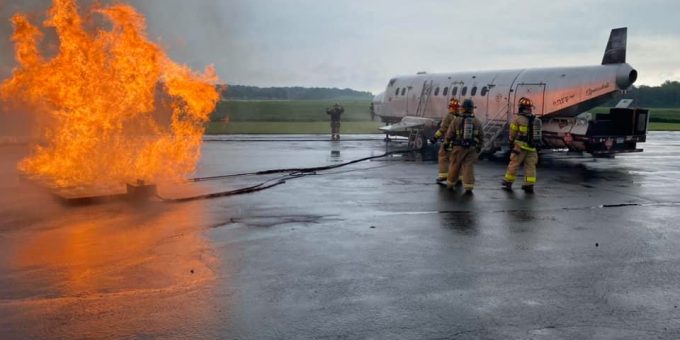 The training lasted most of the day with firefighters using different scenarios that rescue personnel might experience.

“This is our annual training for us starting last year when the first group was able to obtain certification in ARFF,” said Jason Allen Public Information Officer Monroe Fire Protection District.

“We want to say thank you to ARFF Specialists for the phenomenal training and Clark’s LP for supplying LP for the training prop. Great job to all of our firefighters,” added Allen.

Aircraft emergencies are broken down into three categories which are defined by the FAA.

The Monroe County Fire District has a fire station located at the airport to handle any emergencies that may occur at the airport. An aircraft firefighting vehicle was purchased in 1994 along with the building to house a new ARFF vehicle. Maintenance employees completed the required training necessary to assume the FAR Part 139 Aircraft Rescue and Firefighting ( ARFF) standby and response duties at the airport. The employee’s training consists of performing the specific task of the initial response to an aircraft accident until mutual aid arrives.

There have been past incidents that have occurred at the airport where this training would have been of value. One such incident ccurred on October 19, 1985, a private plane carrying Ray Charles ran off a Monroe County Airport runway during heavy rain. Ray Charles and the 28 members were on board and the plane landed just north of the runway in a cornfield. Charles and the passengers were unharmed, however the pilot was injured in that crash.

More recent airplane crashes occurred on April 21, 2006, when five IU music students were killed, and two men were killed in a plane crash in a wooded area near Oard Road on September 18, 2014.

One of the runways is 6,500 feet, long enough for a Boeing 727 to land. In 2012, the airport averaged about 61 aircraft operations a day, with 94 percent of general aviation, 4 percent air taxi service, and 3 percent military. Approximately 104 aircraft are based at the airport.