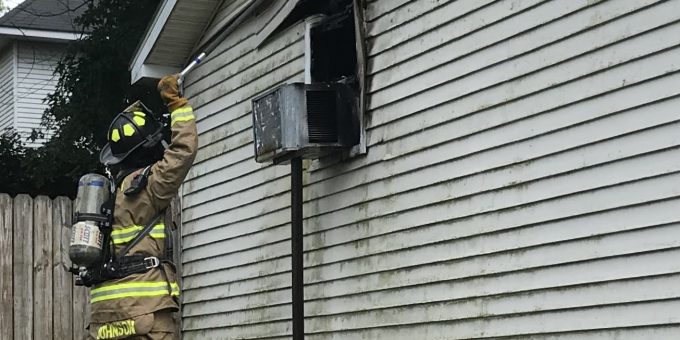 OOLITIC – According to fire officials an air condition unit was likely what started a garage fire in the 200 block of Lafayette Avenue in Oolitic Thursday afternoon.

A neighbor Ryan Speer noticed the fire and his father Marty placed the 9-1-1 call to the fire department at 3:23 p.m. Firefighters from the Oolitic and Shawswick Volunteer Fire Departments quickly responded. Fire and smoke was coming from the garage when firefighters arrived.

The neighbors and homeowners had most of the fire contained before firefighters arrived.

The garage is owned by Jeff Tillette, who operates a body shop out of the buiding.

“There was structural damage and damage to his tools, there was no damage to vehicles. No injuries were reported from the fire,” said Ted Maze Fire Chief Oolitic Volunteer Fire Department.

IU Health Ambulance service stood by at the scene until it was released by firefighters. Warm temperatures can easily cause fire personnel to suffer from heat exhaustion.